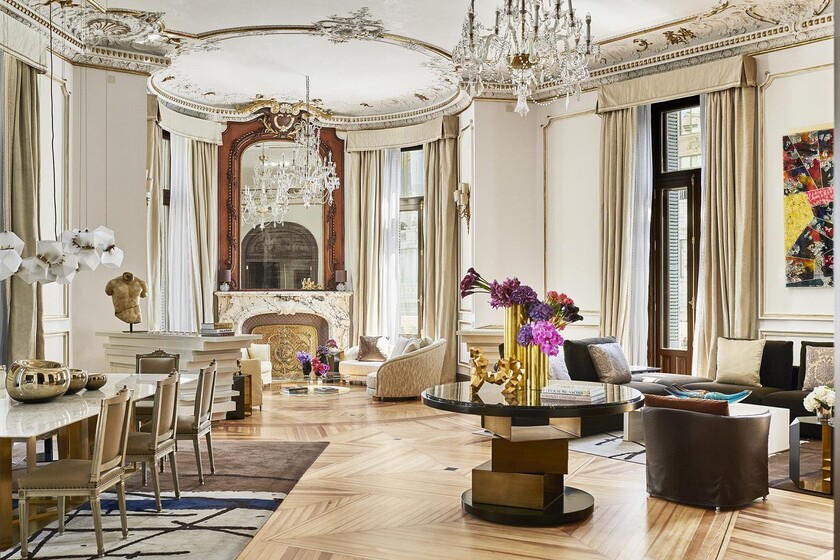 The Four Seasons Hotel It has become one of the trendy places in Madrid. And now, this iconic hotel located in Canalejas has presented what will be the jewel in the crown: the Royal Suite. A unique space that is an authentic architectural jewel and that is located in the old office of Mario Conde.

This Suite is the most exclusive room in the hotel, and is located on what is known as the noble floor, occupying what was boardroom and Mario Conde’s office, president of the defunct Banco Español de Crédito, as well as being the “Main Hall” of the Casino de Madrid, known as “the Great Room of Conversation”.

Index hide
1 A space that combines past and present
2 Art, very present in the Royal Suite

A space that combines past and present


The space remains intact since the property was built in 1897, and has been restored and adapted to its new condition. The architectural project bears the signature of the Lamela Study, while the interior design has been conceived by BAMO from San Francisco, and developed in Madrid by BG Architecture.

This space is a perfect example of how to combine past and future mixing classic and historical elements with modern pieces of design and contemporary art.

The suite has a Louis XV style, and in the set, the openings of the balconies with views of Alcalá and Seville streets, the ceiling moldings, and its impressive fireplace, which remains intact, and which presides over the room stand out.

The historical elements of the complexThe windows, the fine marquetry wood flooring with the use of melis and Oregon pine wood, the wall panels or the ornate ceiling moldings have been restored creating a contrast between the old and the new, with a large presence of pieces. artisans of Spanish origin.

The suite has a total of 431 square meters, which include a spacious living room, a library, a gym equipped with the latest technology, a kitchen, and a mirrored dressing room that connects to the master bedroom and bathroom.

The height of the ceilings reaches 4.80 meters in the living room and 4.25 meters in the bedroom and the main bathroom. The room is dominated by the large three-meter high windows, with their openings, and shutters. The embossed wooden doors, the polished sheen of its antique hardware and the sparkle of its crown moldings, finished in aged gold leaf, give the Suite personality.

As soon as we enter, with its historic stone floor, we find a collector’s library. The warm neutral tones represented by raw taffeta upholstery, silver and gold fabrics, and rough linen damask, are imposed in the entrance and in the main hall of the Royal Suite, which are subtly evolving towards darker tones.

The main hall is dominated by a large fireplace that was restored in situ, with its imposing white marble stone mouth veined with a large mirror with plaster moldings. In it, you can see the initials of the brass plate of the Spanish Credit Bank, as a witness to the history of the building.

In addition, in the main hall there is a avant-garde sectional sofa, which is complemented by two calligraphed rugs in white, while the curved upholstered pieces add dynamism to the space. We can also see a quartzite dining table and a central circular Portoro marble table on a cubist metal pedestal.

As in the rest of the hotel, art is very present in the Royal Suite, dressed in some of the 1,500 works of art that make up the Four Seasons own collection.

Paloma Fernández-Iriondo, art expert and Project Manager of the Art Collection explains “In the selection of the works of art and period furniture for the Royal Suite it was essential not to lose sight of the historical past of the space and its nineteenth-century essence, which gives the Royal Suite its exclusive and unique character.”

With her work, Paloma Fernández-Iriondo has incorporated 21st century art into a 19th century space, successfully combining works of art with furniture and objects. In the great hall with windows overlooking Alcalá and Sevilla streets, the works of Pilar Cavestany Light boxes (2020) provide a vibrant touch to this space with an air of the nineteenth century: two large methacrylate structures that contain various materials and interact with the environment in which they are located.

In addition, the Suite also has works by the Madrid artist Cristina Almodovar or the young artist Jose Chafer, both with more work exhibited in different spaces of the hotel.

Regarding the furniture and objects that dress the Royal Suite, some were bought at auctions to reinforce the historical character of the space. Among the pieces acquired, there is a lamp from the historic Royal Glass Factory of La Granja installed in the bedroom, or a spectacular English mahogany “drum table” with a green crow top, from the time of George III (early 19th century). ) located in the Library, a Carlos IV dresser or two magnificent crystal lamps in the bathroom and entrance to the bedroom from a palace in southern Spain.

In Decoesfera | Do you want to know what the most luxurious hotel in Madrid is like? The Four Seasons Hotel Madrid has already opened its doors