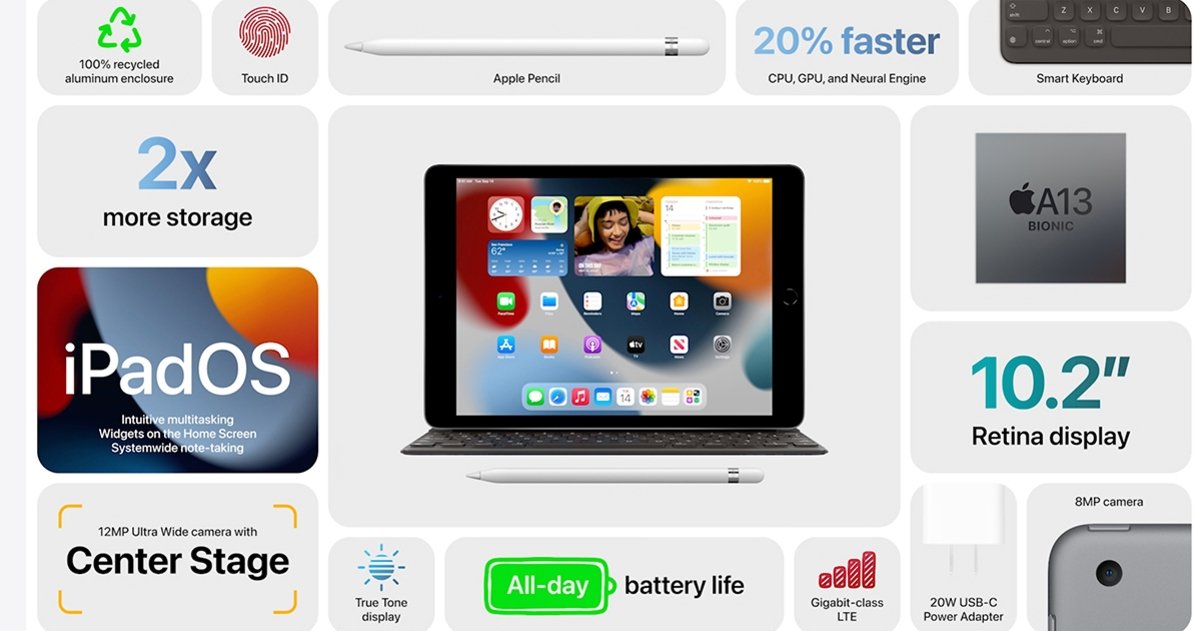 Facebook
Twitter
Pinterest
WhatsApp
Index hide
1 The company has introduced a tablet with a 10.2-inch screen and a base price of $ 329.
2 9th Generation iPad: Features and Technical Specifications

Apple has kicked off its September special event in style, with an exciting series of musical sequences in absolutely spectacular settings that have left us all speechless. Immediately afterwards, Tim Cook took the stage and… first surprise: new iPad!

The Cupertino company has launched a Classic 9th Generation iPad, a tablet that continues to maintain the essence of the first original iPad with a traditional design but that incorporates all kinds of hardware innovations.

Image of the presentation of the new iPad.

Apple engineers have not put too much effort into this iPad model, it is a minor upgrade. It still features the same iconic design and physical home button. Also, in terms of hardware, no major changes have been implemented either. But it is true that it is available at a very competitive price for a tablet with similar characteristics.

This classic iPad has a True Tone display of 10.2 inch and a processor A13 Bionic which provides 20% faster performance than the previous version of this generation of iPad.

On the other hand, the 9th generation iPad has an ultra wide angle camera of 12 megapixels with a new functionality known as “Center Stage”, capable of using artificial intelligence technology to detect people and adjust the image to center the subject during FaceTime video calls.

The new iPad 9 will be available for a very affordable price, according to Apple the cost of the product will be $ 329. With the additional costs of taxes in Spain the figure is 379 euros. As for the iPad in the education sector, the price will be even cheaper, at $ 229.

As indicated from Apple, the new 9th generation iPad will be available as soon as next week. Although you can book right now.

Apple’s September keynote has started at 7:00 p.m. (Spanish peninsular time) and it is being a real madness. From iPadízate we are going to carry out a wide coverage of the event so you don’t miss a single detail. Stay with us and enjoy all the news!