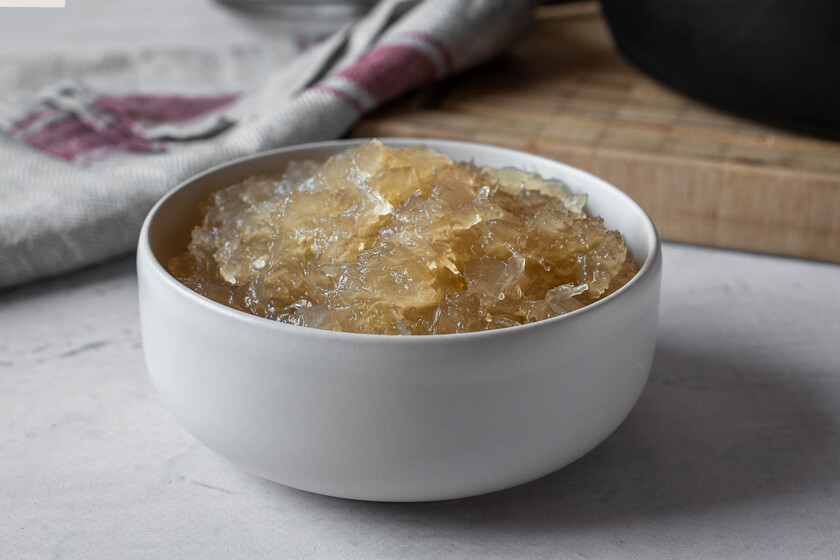 The angel hair, also known as citron sweet, is a traditional sweet made with citron pumpkin, a variety that is characterized by its filamentous interior. The golden threads resulting from cooking its pulp give rise to angel hair that is used, above all, to fill traditional sweets.

As a big fan of this sweet, I would (happily) eat it by the spoonful -anyone else in the room?-, but I control myself and use it to add a touch of sweetness, flavor and juiciness to doughs of biscuits, to prepare cortadillos, bayonnaises, borrachuelos from Malaga, torteles or ensaimadas. Although spreading it on toasted bread or to accompany cheeses is a success.

About the citron gourd

The citron gourd or, simply, citron is a gourd of very hard skin, painted green and very pale yellow flesh almost whitish. Its flavor is mild and it is used, above all, to make angel hair or, what is the same, cider sweet -as they call it in Andalusia-.

It is a winter squash, it begins to harvest from the beginning of autumn until the end of winter. It is mostly water and hardly provides macronutrients, however it is very rich in micronutrients and fiber. Its high content of potassium, beta-carotene, provitamin A, vitamin C, vitamin E, folates and group B vitamins stands out.

The angel hair recipe is quite simpleAlthough it takes a while to get it ready. In its most basic formula, it requires few ingredients: cider gourd, water and sugar. There are those who flavor it with lemon and cinnamon, but this is totally optional.

Cut the pumpkin in half and each half into four pieces. You have to work hard because the skin is very hard. In fact, there are those who recommend dropping the pumpkin so that it breaks with the blow, but we have preferred to throw with a knife and force.

Place the pieces in a large pot, cover with water and cook over low heat, covered, for at least an hour. until the pulp is tender. Remove from the pot, drain and let cool. When it can be handled, we remove the seeds. They are easily removed, but be careful that some small ones are the same color as the pulp.

Read:  Strawberries Romanoff, easy recipe for an elegant French dessert with history, that elevates the classic strawberries with cream

We remove the skin, which we discard, and let the pulp drain again on a strainer, because with cooking it will have sucked up a lot of water. When you no longer release any more liquid, we weigh it. Next, we weigh the same weight obtained, but of sugar.

Put the pulp and sugar with a cinnamon stick and half a lemon in a large pot, cover and bring to a boil. We can do without aromas, but cinnamon and lemon provide a very rich point of flavor. Cook over low heat for at least 90 minutes or until it acquires that amber color so characteristic and see the translucent strands.

If, at this point, there is still some liquid left, uncover the pot and cook a little more until it reduces. Let cool, remove the cinnamon and lemon (if used), and store in the fridge until ready to eat.

We can pack angel hair in canned and vacuum cans. It will last longer, although with the amount of sugar it contains, I guarantee that in the fridge lasts in good condition for several months, the same as any jam. It also supports freezing.