AMLO thanks businessmen for joining the Anti-Inflationary Plan 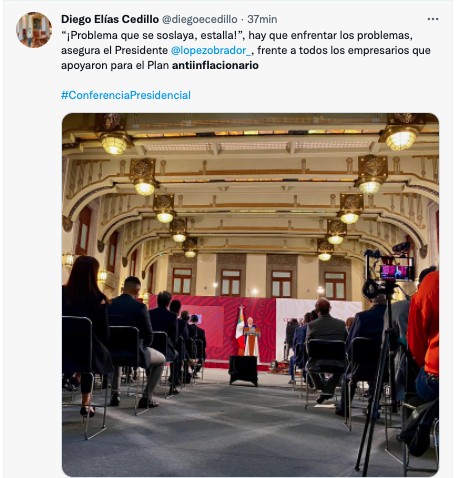 President Andrés Manuel López Obrador (AMLO) thanked producers and businessmen during his morning conference for voluntarily participating in his Anti-Inflation Planwith which they seek to curb the price of the basic basket, as well as prevent the increase of various basic services for Mexican society, with which it seeks to improve the quality of life of families within the national territory.

The Anti-inflationary plan was presented by AMLO together with the Secretary of the Treasury, Rogelio Ramírez de la O, where it is pointed out that it is not a price control, rather, the cost of the basic food basket will be kept at a fair price.

Rogelio Ramírez de la O, advance during one of the speeches presented in the morning that would consist of the plan to prevent the increase in services and the basic basket, advance later that the plan andIt is designed for a control period of six months Due to international pressure, seeking to maintain the current prices of the basic basket, he also pointed out that if this were the case, this period could be renewable.

Rogelio Ramirez de la Onoted that “Inflation is being suffered by the whole world” He also commented that derived from production problems and the damage caused by the current health crisis, aggravated in part by the war that has occurred between Russia and Ukraine.

Read:  AMLO trusts Elon Musk to remove bots and censorship from Twitter before getting paid

The federal government announced that the plan is based on increasing its grain production, in which it was pointed out that it would be corn, beans and rice, which will have priority, for which they estimate that the plan generates an increase of up to 800 thousand tons, as estimated by Rogelio Ramírez, during one of the interventions in the morning conference. In the same way, it was specified that it is contracted with a road safety plan to prevent and reduce food and grain theftensuring that the cost of tolls hood will not increase.

During one of the first interventions of the morning conference, President Andrés Manuel López Obrador thanked the businessmen and producers who voluntarily joined the Anti-Inflation Plan with the intention of curbing the increase in the costs of the basic basket, imposed by the pressure global, for what he pointed out; “This affects people with limited economic resources more, it is a tax and we must avoid a high cost of living.”

Within what was provided, it was pointed out that the companies belonging to Carlos Slim, like the internet and telephony services of Telmex and Telcel, will not increase prices throughout the year, likewise, Grupo Bimbo, announced that for six months it will maintain the price of large white breadafter voluntarily joining the plan proposed by the federal government.

Telegram works on new monetization tools; exclusive reactions and stickers
Amazon will cover costs of workers who travel for medical care; including abortions
“Marvel Effect” in reviews of Dr. Strange in the Multiverse of Madness will boost merchandising
They analyze chapters of John Krasinski in The Office; this spent his character in jokes