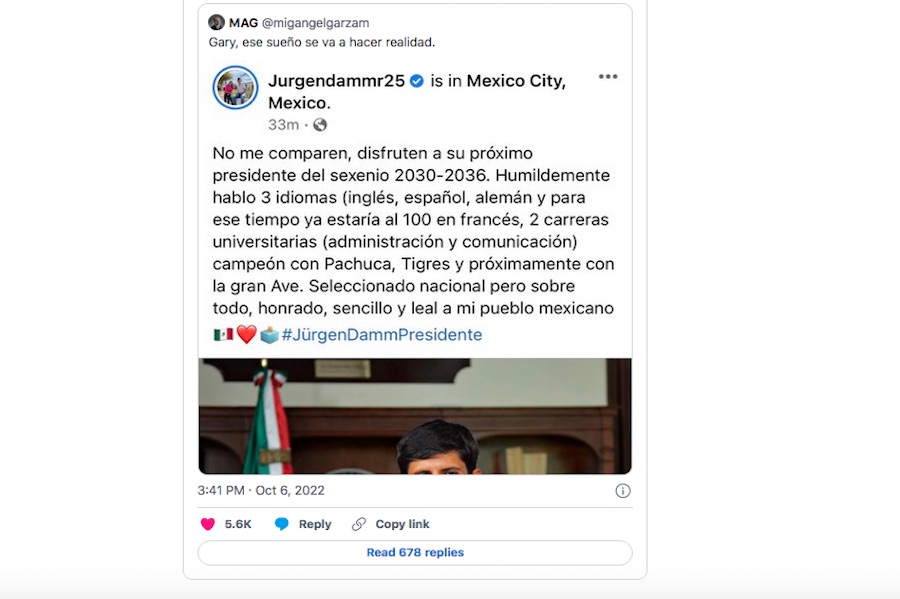 A America’s player announced on social media that aspires to the Presidency in the six-year term 2030 to 2036however, the publication that many have taken as a joke for the way in which it has been announced, far from being in the sights of the INEremember how important the role of social networks is in politics.

The decision, joke or not, of the soccer player patents the exercise that is carried out in networks, related to the influence of politics through this medium, according to a Estimate of 2018 Political Advertising Forecast.

Based on these figures, a series of notes have been made, which manage to attract the attention of the market, based on a key concept that is to interact in the market through elements that manage to be valuable to the electorate.

Without considering key elements in digital political marketing, the study “2018 Political Advertising Forecast” explains that during 2020 they were invested two thousand 847 million dollars.

The impact that this projection has on the market is fundamental, because it achieves very important goals of interaction with the citizen, where one point is important to consider, which is to attract the attention of citizens who vote.

With this in mind, there are very important resources to take into account in the market, such as those that have to do with the ability that political brands achieve, from their aspiration, to leverage social networks to expose themselves in the market.

The former Mayor of the municipality of San Damián Texoloc, in Tlaxcala, Miguel Ángel Covarrubias Cervantes, is one of the most commented cases in digital political marketing since 2017, when we announced that the politician became a case of great attention before the Facebook users, after it became known that the politician used speech of House of Cards to promote yourself online.

The action not only earned him criticism for using content from one of the first original series, with Netflix’s international reach, it also became a guideline to comment on how important communication has become on social networks.

Now we have the case of Jürgen Damm, who plays for America and who announced on his social networks that he aspires to be president of Mexico in the six-year term from 2030 to 2036.

“Mexico needs capable, prepared but above all honest people to guide the country to its maximum potential. Let me raise the 14 with the Gran Ave and play 5 more years (I’m barely 29) and then send beautiful centers (indications) from the National Palace”, explained the soccer player on networks, who would follow in the footsteps of personalities like Cuauhtémoc Blanco, who went from also be a player of America to governor of Morelos.

Mexico needs capable, prepared but above all honest people to guide the country to its maximum potential. Let me pick up the 14 with the Gran Ave and play 5 more years (I’m barely 29) and then send beautiful centers (indications) from the National Palace 🇲🇽❤️✍️ #JürgenDamm2030 https://t.co/TAaOCIikHe

Given these guidelines, there is an indispensable resource to consider how important communication has become in social networks with a comprehensive aspect in this exercise and it is the one that has to do with how important the media have become.

Undoubtedly, it is important to see the capacity that brands have to innovate and rethink consumption in the market, where a crucial aspect in marketing has been established and it is the innovation that personal brands play in this channel.