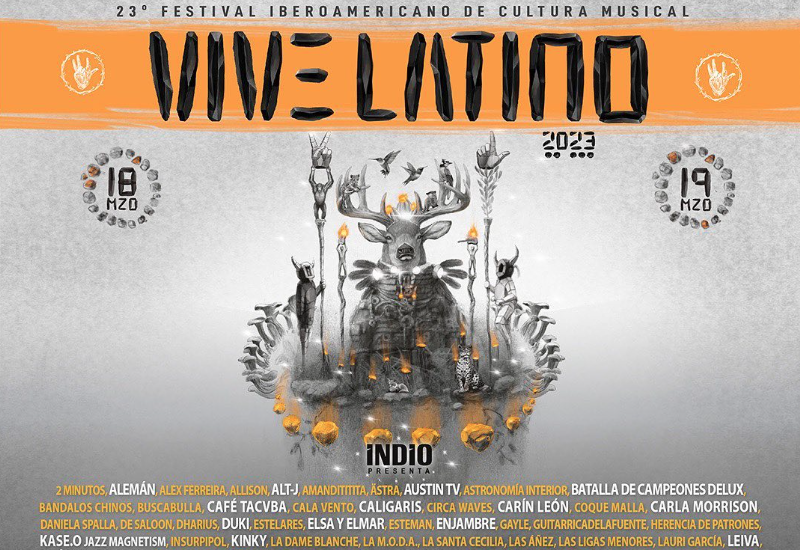 Yesterday, the official poster for the Vive Latino 2023 Festival was released; Today, the prices for tickets in Phase 1 were shared, generating great expectation among fans of live music.

Almost two years had to pass, since the start of the pandemic, for massive festivals and concerts to return to their original format, as is happening in 2022.

Let’s not forget that as a result of the global health emergency, the music industry was one of the hardest hit. Only in Mexico, according to what was announced by the Survey Music Mexico impact COVID-19Between March and June 2020, losses of up to 500 million pesos were recorded.

However, since 2021 significant income began to be reported, as disclosed by PwC, indicating that the music industry (recordings and live shows) in Mexico reached revenues of 814.64 million dollars.

In Mexico, since 2021, it is true that the concert industry began to reactivate, managing to accumulate a significant number of shows, although with an important series of measures to avoid contagion of Covid-19, where the use of face masks was essential. throughout the concert.

Today, however, the situation is different and the industry itself has returned to its old practices, with massive events and, above all, with a great response from music fans.

So much has been the rage to relive a concert as they were known before the pandemic that, according to what Live Nation publishes, in May 2022 more than 70 million tickets for various shows had already been sold, a figure that represents a 36 percent increase compared to the same period in 2019.

This year, in case there was any doubt that fans needed to relive this type of experience, the Vive Latino and Corona Capital festivals sold out their tickets in a matter of minutes, a fact that even caused the anger of a significant number of fans. .

Looking ahead to 2023, unless Covid-19 regains its threat or another virus of similar lethality emerges, the situation for the industry looks much healthier, especially at a time when, since yesterday, The 2023 edition of the Vive Latino Festival was announced.

Scheduled for March 18 and 19, 2023, Vive Latino will start selling tickets starting next Monday, October 24, which is why, for this pre-sale round, the prices for tickets have already been announced. festival tickets.

According to what was published on their social networks, the price of subscriptions in the “General” mode and in the so-called “Phase 1” have a cost of $2,388 pesos. Now, for the “Platinum” modality, the price is $3,540 pesos. It should be noted that these prices do not include the service charge, so the figure will increase even more.

On the other hand, the “Comfort Pass” and the “Vive la Suite” contemplate a price of $3,120 and $5,600 pesos respectively, thus unleashing a wave of comments that question the high prices of the tickets.

“Do you think we are rich Ticketmaster?”; “It is not worth the price”; “I kind of lost the desire to go”; “They have us fed up with their phases. What’s wrong with them?“; “And that is the price of phase 1. No, thank you, I’d better wait for Pa’l Norte”; are some of the comments deposited by Internet users.

One of the most frequent complaints from users is due precisely to the fact that ticket sales are sold in phases; the more you continue to advance in phase, the more expensive the price.