Bullfrag
Home Technology Gaming Age of Empires IV is the best game to start with real-time... 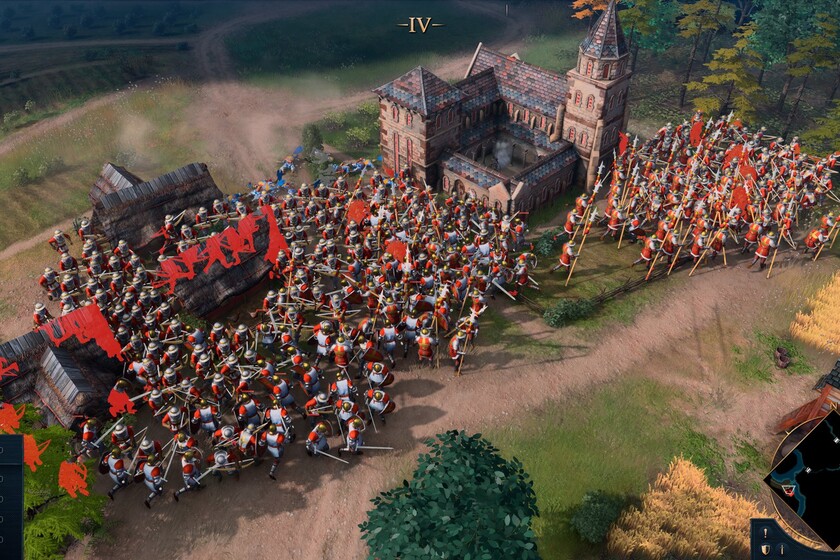 I must admit that, as much as I like them, Strategy games I am very bad at it. It does not matter if we talk about RTS, in shifts or 4X. I have tried everything from Starcraft 2 to Total War: Warhammer, through Civilization VI, Stellaris or Endless Space 2. But none is given to me, no. There is a certain point where I lose control of everything that happens around me, of the game, I am left behind. I have no problems with other complex games like MMOs, but these are difficult for me. This week, yes, I had the opportunity to play Age of Empires IV, a game that I knew was being recommended by colleague Alberto Pastor with great fanfare. And the experience it has been very different.

It is the first time that I feel that I am understanding everything that happens around me in a game of these characteristics: where are my subjects, what they do, how many resources I generate and what they are for. I also understand which units I must deploy to defend myself against each opponent, and I am even able to go from age I to age II in about six minutes with the English and the French. Sounds like a small thing? Of course, it is really little thing. But it feels like huge progress for someone who, under normal conditions, would spend half a game pulling food out of the bushes. And all this progress I owe to the fact that AOE 4 is a game very accessible.

Fortunately, the issue of accessibility is increasingly popular in the video game industry: we have very complex games, but that (almost) any player can enjoy regardless of their motor skills or level of experience. Yes, there is still a lot of work ahead, but we are getting the batteries. AND Microsoft has long been at the fore in this field thanks to the super flexible Xbox Adaptive Controller, as well as a strong commitment to the software own. But right now, what interests us is to understand how Age of Empires IV manages to involve the player in cognitive concepts or processes that you cannot perceive normally.

Video games have many subtle ways of leading us through their levels: for example, a designer can tell you which way to go simply by lighting up the place with a streetlight to get your attention; while in Super Mario, the appearance of the enemies tells you if you can jump on them or you should throw a fireball at them – you don’t need to read anything to know that if you jump on a shell that has spikes, you will hurt yourself, it is logical! – but in an RTS, things are not always so obvious. And there we have the first challenge that the player faces: not knowing how to proceed, how to face adversity.

Mark Brown in Game Maker’s Toolkit used to say that strategy games often follow the same pattern for their tutorials: “click here to get this, now we’re going to build this, let’s do it like this.” By the time you finish the session you have done many things, but you have not learned anything because nobody explains you for what reason you want to enter such menu or build such thing. He also rightly commented that if you die in, say, a Call of Duty game, you quickly understand what happened there and learn what was your mistake. In an RTS, however, you may not understand what you’ve done wrong until several hours into the game and you’ve fallen behind. It is not the most practical.

The Age of Empires IV tutorial is also very linear, but at least it goes out of its way to explain the things of logical and orderly way: you have villagers, you need food. You can get it directly from the wild, but if you hunt you get more in exchange for endangering your villagers because they are further from home. ReasonableDon’t you think Yes of course. By the time you realize it, you have farms, sawmills, and quarries up and running; the basics of production. The same goes for the militia– You understand the basics of attacking a lonely and defenseless enemy unit, just so you can see on screen, firsthand, how to fight in AOE.

Read:  Fans would have discovered a new clue about GTA 6 in GTA Trilogy Definitive Edition

If you need to learn to play any faction, the menu explains how to do it.

Once you understand that, you come to understand that spearmen, horsemen, and archers are a bit like rock, Paper and scissors. And then, to ration the number of troops you send to each task. It is like this, little by little and with your head, how you have a clear image of what happens on each screen: a necessary process, because the games they get complicated a lot as they go. By the time you get to phase III, for example, the game looks more like a polis with multiple interconnected systems: troop and building production depends on how tightly tied you are to acquiring materials, but not you can know that if no one explains it to you.

AOE 4 cares not only that you understand what problems do you have, why you have them and how you solve them, but also has sessions of training to help you put everything you’ve learned into practice without going through a multi-hour campaign. For example, one of them asks you to survive several enemy hordes without losing a certain number of soldiers, but before you start, you watch a video where they explain what units do counter and what are your combative strategies favorite. In those special sessions, you don’t have to wait to produce anything: it is simply a lesson to put into practice important concepts that helps you quickly understand things that you would otherwise be looking for on YouTube.

Personally, I really appreciate not only that these levels exist – in Total War: Warhammer 2 there were also very good preconfigured battles, for example – but also that once inside, you have notifications warning you of the things you are doing wrong on the go, like leaving your minions to sleep instead of assigning them to a task or not constantly moving your scout. Very typical things, but that usually remain in the air. These challenges, these pre-designed levels of practice, have more than one level of difficulty. If you play “basic economy” or “basic siege” the game will attract more attention with the failures and will give you more indications than when you play “advanced economy” and “advanced siege”, besides that each screen is more complex of first.

That Microsoft has understood how to explain these things, honestly, gives me very good vibes because I think that strategy is one of those genres where the player has to be above the game itself to do something, as also happens with the fight. And that first contact is pretty tough. It’s also not like AOE 4 leaves you alone and on the loose as soon as you finish the tutorials, because each of the eight factions available has its own style of play and own traits, which are conveniently broken down in an appendix of the main menu called “learn”. From there you can access links that lead to the official website, full of information about “who are these guys and how they play” as well as drop-down trees about the mechanics, units and unlockables for all of them.

And even at these levels, learning curve it is well defined. A good Age of Empires player is not only able to build quickly, but also knows which upgrades to choose based on what their opponents are wearing, knows the keyboard shortcuts that allow him to properly divide his subjects and is able to think long term: “They are going to do this, I can anticipate myself in this other way.” I still have a long way to go to that point, but I’m happy to know that this is what I need to do, what areas I need to improve in, and where to go to hone the skills I need. I know that many have learned with a lot of time and effort and I admire that! but I think the game is more fun that way.