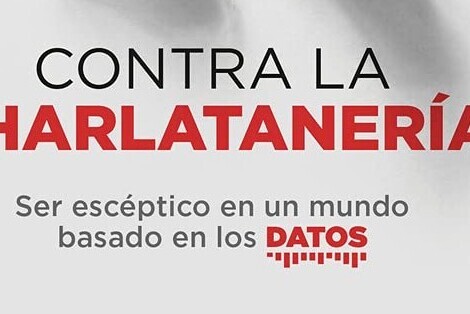 Charlatanism is impossible to eradicate. The maguferías, the fake news, the junk information, the insidious rumors, the myths that are perpetuated generation after generation despite being manifestly false, even very easy to demolish because it contradicts all the scientific literature collected for decades.

That is why there is the ironic principle of asymmetry of Brandolini about stupidity: “The amount of energy that is needed to refute (or correct) a stupidity, is of greater magnitude than that needed to produce that same stupidity.”

And if that was not enough, social media has shown to what extent this principle is true, having Jonathan Swift himself removed from his grave, who one day in 1710 already wrote: “Falsehood flies and truth comes limping after it.”

Bullshit: Against Quackery: Being Skeptical in a Data-Driven World (ESSAY)

Books that inspire us are all about: Bullshit: against quackery, from Carl T. Bergstrom and Jevin D. West. How our brain is easily manipulated, what the symptoms are, and, above all, what we can do to combat it.

Words weasel and other viruses

The Pyou say weasel (weasel words) are sentences that, under the guise of something concrete and significant, hides a vagueness or an ambiguity that is impossible to confirm. (Eg: “as everyone knows”). They allow to distort the information and drain the bundle (which weasel). We are surrounded by them.

Drawing on deep experience in statistics and computational biology, Bergstrom and West abundantly unravel examples of selection bias and confusing visualization of data, distinguish between correlation and causality, and examine the susceptibility of science to modern hoaxes. We have always needed people to uncover lies when necessary, whether within a circle of friends, an academic community, or among citizens. Now that those lies have evolved, we need to relearn the art of skepticism.

It seems particularly important to differentiate between correlation and causality. Knowing if we are facing a correlation is so, so elusive that, probably, most of the time, we confuse them. It’s the ignorance of ignorance. But almost all solutions are based on the assumption that we know that we are dealing with causality and not correlation.

For instance, Is it correlation or causality that taller men have a higher salary than shorter men? The answer has so many layers that it is simply difficult to answer that question, as you will see in the following video:

Ultimately, this book is something of a life jacket. The storm will continue to beat, But maybe, just maybe, we’ll avoid drowning.