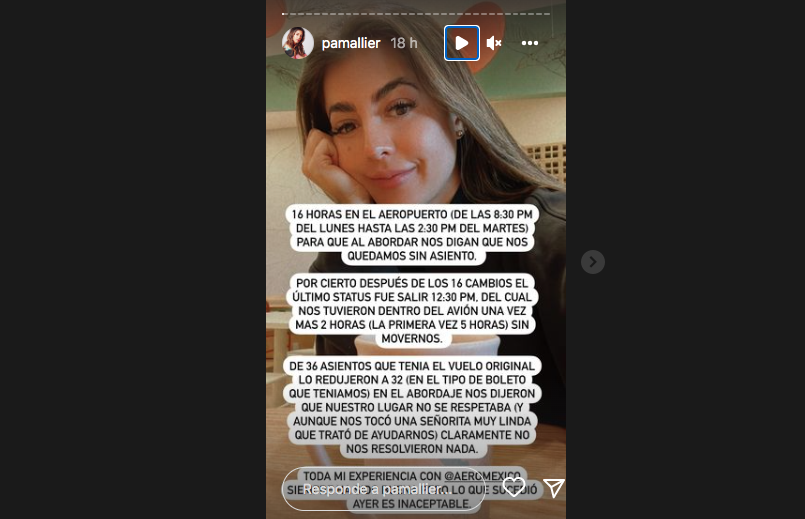 On Instagram, an influencer shared her story with Aeroméxico, accusing the airline of waiting about 16 hours so that, in the end, she would run out of seats.

By now, it is well known that the pandemic has hit various industries and, even today, for several of them the return to normality is still complicated.

One of the most affected by the rise of the global health crisis was the air transport industry, which, according to data from Statista, during 2021, this industry recorded revenue of 231 billion dollars (less than half if we buy the 607 billion dollars in 2020).

On the other hand, according to information from the World Tourism Organization (WTO), it has been announced that the tourism industry could return to normal, not before 2024, but showing considerable growth compared to the previous year.

Taking these latest data into account, it is a natural scenario, because, despite the fact that the situation with Covid-19 seems more controlled thanks to the arrival of the vaccine against the disease, there is still a latent risk and fear among users. to start traveling.

On the side of the companies that are responsible for providing this type of service, they continue to seek to offer the best experience to passengers; Nevertheless, one of the constant complaints, even in these times of reactivation of the industry, are flight delays, among other problems.

Aeroméxico leaves influencer without a seat

This is the case of the influencer Pamela Allier, who, through her Instagram account, released a couple of stories regarding her experience on a flight with Aeroméxico, which, as she relates, has not been the best .

The passenger assures that she waited for several hours at the airport, in a period between Monday at 8:30 p.m. and 2:30 p.m. the following Tuesday, in addition to the fact that, in the end, according to what she narrates, she ended up running out of a seat. .

According to the influencer’s words, her experience flying with Aeroméxico would always have been good, which is why she describes what happened as “unacceptable.”

Pamela Allier is an influencer who, on Instagram, has about 800 thousand followerswhile the likes on their posts also number in the thousands.

Nowadays, consumers are looking for brands that, above all, offer a good experience in their services, in addition to the fact that these are times in which the client has a social network through which they can share their complaints. .

It should be noted that this only reflects the opinion of the consumer and the conversation that it generates in the digital pulse, Therefore, Merca 2.0 requested the position of the brand in order to tell both versions of the story; however, so far it has not been received. The note will be updated in case of a response.

One Piece Red will have a new luxury clothing line

Where the MX league, the Premier League and the Champions in streaming