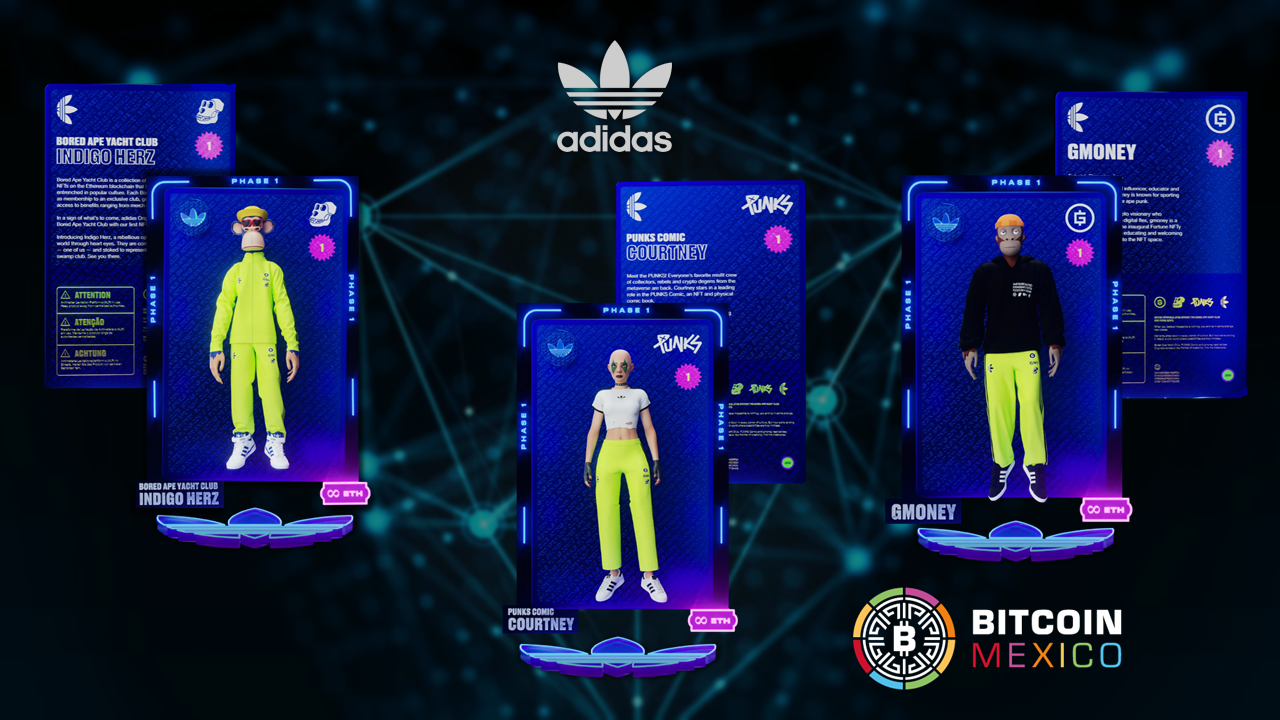 More and more companies are deciding to give crypto assets a chance and decide to launch a product or service that is related to them.

This is the case of the German multinational company founded in 1949, Adidas, which recently managed to make $ 23.4 million dollars in a ‘milestone’ after making its debut in non-fungible tokens (NFT) “Into the metaverse“.

The incredible volume of sales registered in the last 24 hours served as an impetus to bring the company to the top of the NFT projects, according to the portal CryptoSlam.

It should be said that the little over $ 23 million was raised on Ethereum, via an early access phase of $ 15.5 million and $ 7.5 million in overall sales.

This was not an easy task, as the sports company was forced to interrupt the first transactions due to a technical problem. However, the sportswear business made it clear that there is an audience interested in NFT collaborations, initiating a partnership with Bored Ape Yacht Club, an existing Bored Ape NFT collection, which is today the seventh largest collection by sales volume.

The company announced its plans related to the NFT market for the first time in early December after acquiring a Bored Ape and overlaying it with clothing from Adidas.

With the acquisition of an NFT, its brand-new owners will have access to limited-edition physical goods, such as a hoodie and the tracksuit worn by the Adidas-owned Bored Ape, as well as access to the next virtual experiences of the firm.

It should be noted that the physical merchandise will not be available until next year, so, for now, buyers will only be able to pre-order.

The firm reported that there were in total, 30 thousand non-fungible Adidas Originals tokens available, all of them minted on the Ethereum blockchain, plus 20 thousand of these tokens were offered for the first time to the NFT holders of Bored Ape, Pixel Vault, Mutant Ape NFT, and to the holders of Adidas Originals POAP, and gmoney.

Read:  Nike, Puma or Adidas ... unisex brand sweatshirts for in and out of the gym

The company published a mysterious post about his file POAP last October, despite the fact that at that time it did not seem like a publication dedicated to commemorating any particular event. Still, people chose coin them anyway, hoping that in the future the brand will clarify the information.

The clarification that users needed came when Adidas went public with its early access sale. So in a single afternoon, the 20 thousand early access tokens simply disappeared.

It is so, Of the 10,000 remaining tokens, both the sports tennis firm and its partners decided to keep 380 of them in order to use them in “upcoming events” so they chose to launch 9,620 remaining to the public, with the condition that there be only two per customer. However, this did not stop the tokens from “flying like hot cakes” and stocks running out in less than a second.

However, there are always creative people who manage to break the conditions that brands sometimes impose on products and services, which is why they managed to bypass the limit of two tokens through the execution of a personalized smart contract, which produced 165 sub-smart contracts, each with a single address, to mint two NFTs each of Adidas’s smart contract in a single trade, before remitting the 330 tokens to the creator’s principal.

The Blockchain Engineer Montana wong wrote a detailed analysis of the procedure on his official Twitter account.

According to Montana, the developer of the contract paid approximately $ 104,000 in gas costs to perform the corresponding processing, in addition to about $ 252,000 for the NFTs.

It should be noted that, Each non-fungible token was retailed for 0.2 ETH, meaning the developer needed its value to grow to 0.28 ETH to break even.

Likewise, if it is considered that prices have managed to rise to almost 0.8 ETH. This shows that their efforts paid off three times over.

Japan opens its borders to tourists, but only in groups