By DominicAugust 15, 2022No Comments3 Mins Read 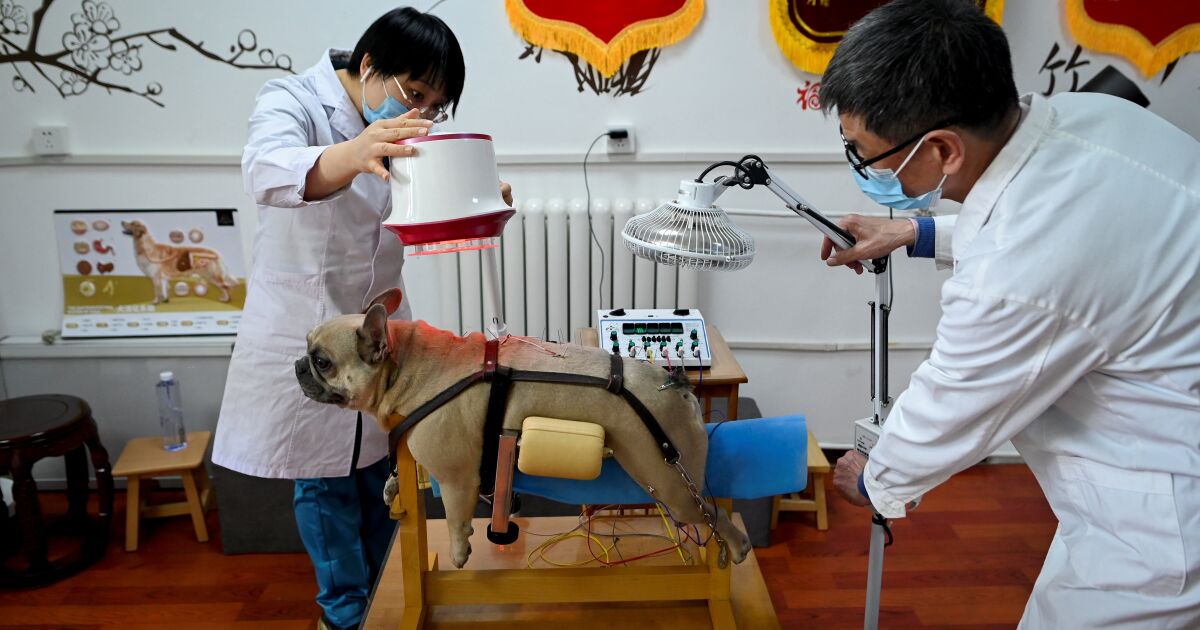 Duniu joins the growing list of patients of the traditional medicine in chinapractices that according to their owners are less invasive and have fewer side effects than traditional treatments.

Pets of all kinds and sizes come to an office in Beijing.

“The advantage of traditional Chinese medicine is that there is no surgery,” Zhai Chunyu, the owner of Duniu, told AFP. “Thus, the suffering of the animal is reduced.”

At just three years old, this miniature poodle suffers from Legg-Calve-Perthes disease, which affects the femoral head and can cause painful osteoarthritis. “She was in so much pain that she could no longer put her paw on the ground” and “had no appetite,” says Zhai, who works in finance.

“A doctor advised me to remove the femoral head. But I didn’t want to because I have another poodle that happened to him and he suffered a lot from the operation and the aftermath,” he explains.

And then a friend suggested trying acupuncture. “After five or six sessions, we saw the results. Duniu can walk and even run a little now,” he celebrates.

Animal acupuncture has a centuries-old history in China, says veterinarian Li Wen, who opened his practice in 2016.

“Traditional Chinese Medicine not intended to replace conventional medicine” because “both have their strengths” and are complementary, he explains.

Read:  Where to watch the game against Costa Rica

Before starting the treatment, the veterinarian weighs the animal, checks its eyesight and the color of its tongue, takes its pulse and asks its owner some questions.

Then proceed to place the needles in specific points for dogs and cats. “Of ten animals that I receive on average every day, there are always one or two that rebel,” Li confesses. “You have to communicate with them, treat them with care, reassure them that you’re not there to hurt them,” she explains.

To help you relax, the clinic’s background music plays soothing melodies of bamboo flutes and birdsong. Li especially works on cases of paralysis, limb weakness, epilepsy, pain, and urinary retention. But acupuncture can also used for conditions when no other treatment is available.

That was the case for Xiaomei, a 12-year-old male Labrador who suffered from nerve compression in his lower back.

“Last September, after swimming, he couldn’t stand up. A vet told us then that it was impossible to treat and that he was going to be paralyzed,” recalls his owner Ma Li.

“Thanks to acupuncture, he still has difficulties, but he can walk normally and even run,” he explains.

“The first time I was scared,” Yang Lihua says of her Pekingese dog Niannian, who is suffering from a herniated disc.

“Now he loves it! After each session, he is so relaxed that he falls asleep in the car on the way home,” the woman explains.

Although the market for animal acupuncture is still limited, “since 2016 it is gaining popularityLi says.

“As educational levels and living conditions improve and incomes rise, more and more people realize the benefits of this medicine,” he says.