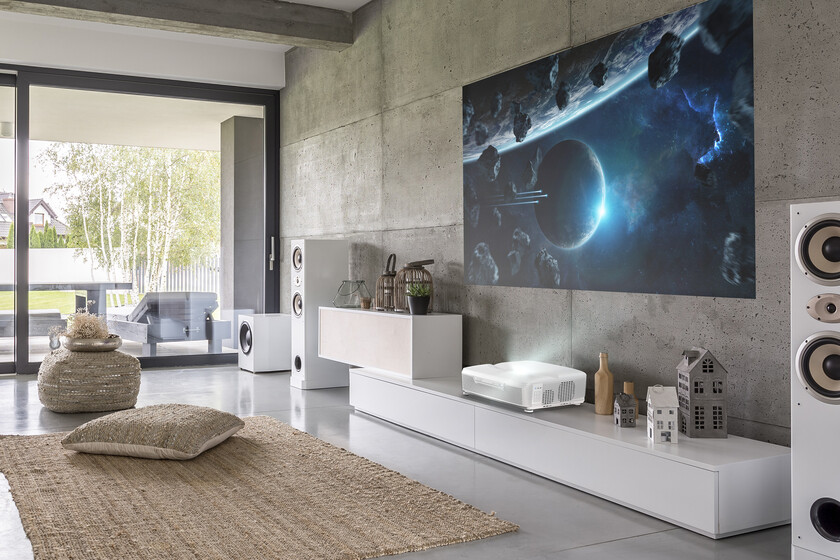 Lately, setting up a home theater has been a lot easier than in the past. Home projectors were designed for that purpose, and today we learn about Acer’s latest offering, the Acer L811 laser projector. And it is that among all the novelties that this new projector incorporates, we find a 4K resolution, HDR10 compatibility and up to 3,000 lumens of brightness to view all kinds of content at its best.

With an ultra-short throw, a type of which we have already explained its main advantages, it is a projector that we would place as close to the wall as possible so that its beam is distributed upwards and throughout the wall. With a projection of up to 120 inches From just 0.312 meters, these types of projectors work very well in confined spaces.

Deep blacks and rates up to 240Hz

Thanks to the integrated laser light source, the device boasts a contrast ratio of 2,000,000: 1. In addition, it incorporates Acer LumiSense technology, which analyzes the content we are viewing frame by frame to adjust the brightness level.

Along with all this, the projector also supports 144Hz and 24P 3D signal via 3D Blu-ray. In addition, there is an option to transmit at 240Hz and 1080p resolution and with practically no image lag, making it a very good option for those who love video games. “big time“It is also accompanied by two integrated 10W speakers with TrueHarmony to enhance video and sound quality.

Regarding its software, it must be said that the L811 already comes with a pre-installed app store, so we will have the possibility to add any streaming service and not depend on any external device for its operation. In addition, thanks to Miracast or EShare, users can stream any content from a smartphone or tablet to the projector, expanding its wireless possibilities.

With everything the projector offers, energy saving settings are also needed. That is why the Acer L811 has EcoProjection technology, which reduces standby power consumption by up to 66% in order to extend the life of the laser in about 30,000 hours. In addition, its IP6X certification makes it resistant to dust.

The Acer L811 projector will hit stores next November at a price of 2,599 euros.

Kitsch, minimalist or retro … we select the perfect pots for our indoor plants

what it is for, advantages and disadvantages of its use

Open doors; harmony of styles in this large apartment in Milan

13 deco furniture and accessories in this adorable color

The new autumn collection of Zara Home presented in a luxurious setting, an Alvar Aalto house, an icon of modern architecture

Deep scrubbing, forgetting the classic mop and bucket, is possible with this two-in-one system (which costs less than 20 euros)