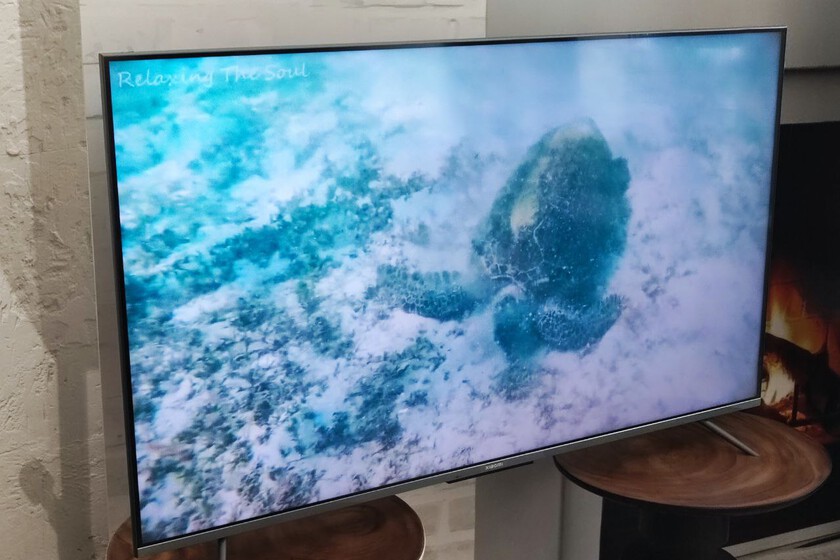 The 55-inch Xiaomi Q1E is the great novelty of the Q1 range. This is characterized by offering televisions built in QLED technology, which offers vibrant and striking colors. In addition, they are usually only mounted in the high range.

Notably there are several differences between the 55 and 75-inch model, despite the fact that both have a panel built in the same technology. The 55-inch has a peripheral LED, while the 75-inch is Full Array. The refresh rate also goes from 60 to 120 Hz.

This time, we have seen the Smart TVs live, but we have barely been able to perform tests, so we will not go into assessing the quality of the panel.

Nevertheless, the design of the 55-inch is one of the sections that most caught our attention. Despite the fact that the frames were already very successful in the larger-inch televisions of the P1 range, this time Xiaomi has refined the shape and optimized the space even more.

These frames have a metallic finish, reinforced and have a good touch. It remains to be seen how they show in terms of light bleeding and general performance in the final commercial version.

At the bottom there is a button to turn the microphone off and on next to the Xiaomi logo, following the previous line. Minimal and attractive.

The remote control is still Bluetooth, in fact, it is the same that accompanies televisions Xiaomi P1, which saves you from having to be pointing directly at the TV.

In addition, it has different shortcuts to services like Netflix or Amazon Prime Video. All apps are integrated into Android TV, so you can download all kinds of applications, and even the odd game, in a simple way. This range also features PatchWall, Xiaomi’s famous customization layer for televisions.

Read:  Part of the redesign of Android 12 reaches mobile phones with previous versions

In fact, this model has the integrated MEMC technology. This takes care of square the frames to be compatible with content prepared for higher refresh rates, new generation video games at 120 Hz, for example. It also has HDMI 2.1 ARC, perfect for the new generation of consoles.

Launch date and availability of the Xiaomi Q1E

There is no doubt that we are facing one of the best options that are in the market for its price range, and more with the launch price of 599 euros for the Early Bird. The release date? In just two weeks, as confirmed to us.

When it seemed that everything was over, the company he had an ace up his sleeve. In this case it corresponds to the sound equipment that was announced a few days ago and that has now arrived in Spain.

The Xiaomi Soundbar 3.1 it corresponds to a sound bar accompanied by a subwoofer. It is striking that it is a black soundbar, when the vast majority of Xiaomi products of this style are usually white.

Although the color, which does not give us any clue about the model it is, we find the new Xiaomi logo inscribed in the center of the device.

If you look at the top, we find different buttons through which we can carry out multimedia control, something that can be very useful in certain situations.

It should be noted that, although the Soundbar incorporates its own remote controlIf you have a Xiaomi TV with a Bluetooth remote, you can control both devices from the same place.

One of the curiosities that this device has, beyond the many connections it incorporates, is that it has NFC technology for fast pairing, so Xiaomi also conceives it as a speaker to be able to play music, beyond the audio of the television.

Its 430 W of power should not leave anyone indifferent, so it is a really powerful device that would offer good sound quality.

The Xiaomi Soundbar 3.1 eIt will be available at the end of December, for Christmas, at a price of “Early Bird “for 249 euros; After this date it will return to its RRP of 279 euros. A contained offer for what it proposes and a good opportunity to dress the new Q1E televisions with the best audio.