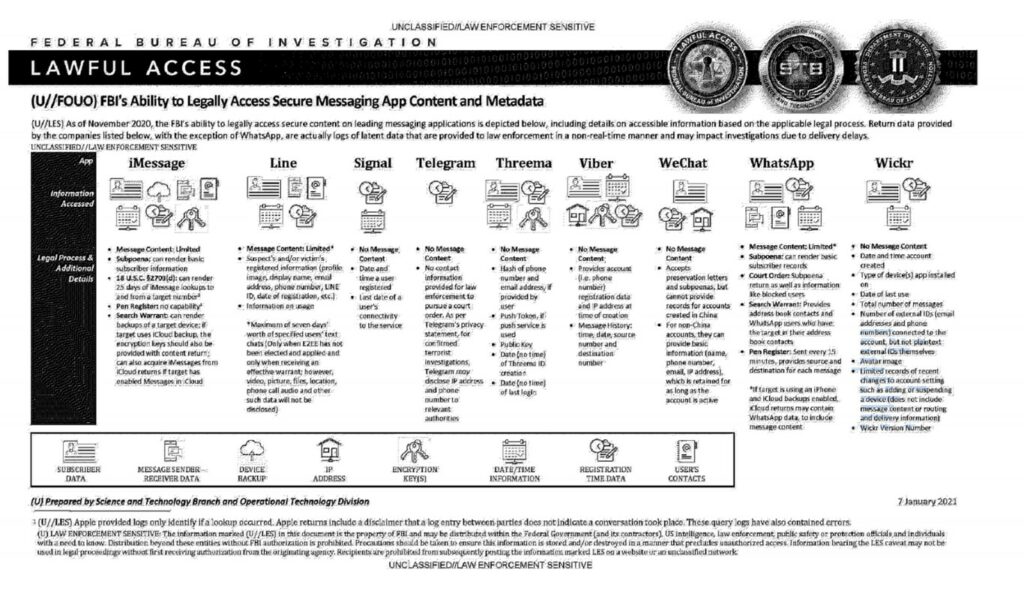 An FBI training document reveals how US authorities can gain limited access, provided they have a warrant or subpoena, to the content of encrypted messages from “secure” messaging applications such as iMessage, Line and WhatsApp, but not to messages sent via Telegram, Signal, WeChat and Wickr.

This document, dated January 7, 2021, constitutes a perfect summary of how much information the FBI can extract from nine of the most popular messaging applications in the world.

WhatsApp and iMessage are the most permissive

Despite the fact that both messaging applications promise their clients maximum security and data protection, the FBI document, which was released recently, describes them as the most permissive compared to the others.

What should you do if your WhatsApp account is hacked?

We all know that Mark Zuckerberg has struggled to articulate or at least convince us of a “privacy-centric vision” around WhatsApp, while Apple has repeated countless times to believe in “transparency and user control.” But how safe is our data really?

The document, entitled “Legal Access” and prepared jointly by the Division of Science and Technology and the Division of Operational Technology of the FBI reveals that WhatsApp is the messaging application that provides the most information about users and their activities in real time, thanks to the metadata it generates.

With a search warrant, the FBI will be able to request the address book contacts of a user, as well as other users who are part of the investigation. In addition, the document also specifies that the FBI can access the subscriber’s basic information only with a subpoena.

The information that the FBI can obtain ranges from messages, contacts, images to backups and even conversations in real time.

Likewise, the document reveals that Apple has the obligation to deliver the basic information of the users, as well as the activity of 25 days in iMessage.

In addition to being able to access the real messages sent and received that could be stored in iCloud, through a court order. Not forgetting that they can also have access to the encryption keys.

This completely contradicts the privacy that these two tech giants guarantee to users.

The most restrictive messaging app

On the other hand, Telegram is the most restrictive application and according to Rolling stone, will only share some data of its users to the FBI when it is proven that the investigation is related to terrorism cases. These data would be: IP addresses or telephone numbers.

So now you know, having WhatsApp with active backups in iCloud could be dangerous for the privacy of your data. Choose well the messaging applications in which you share important information.