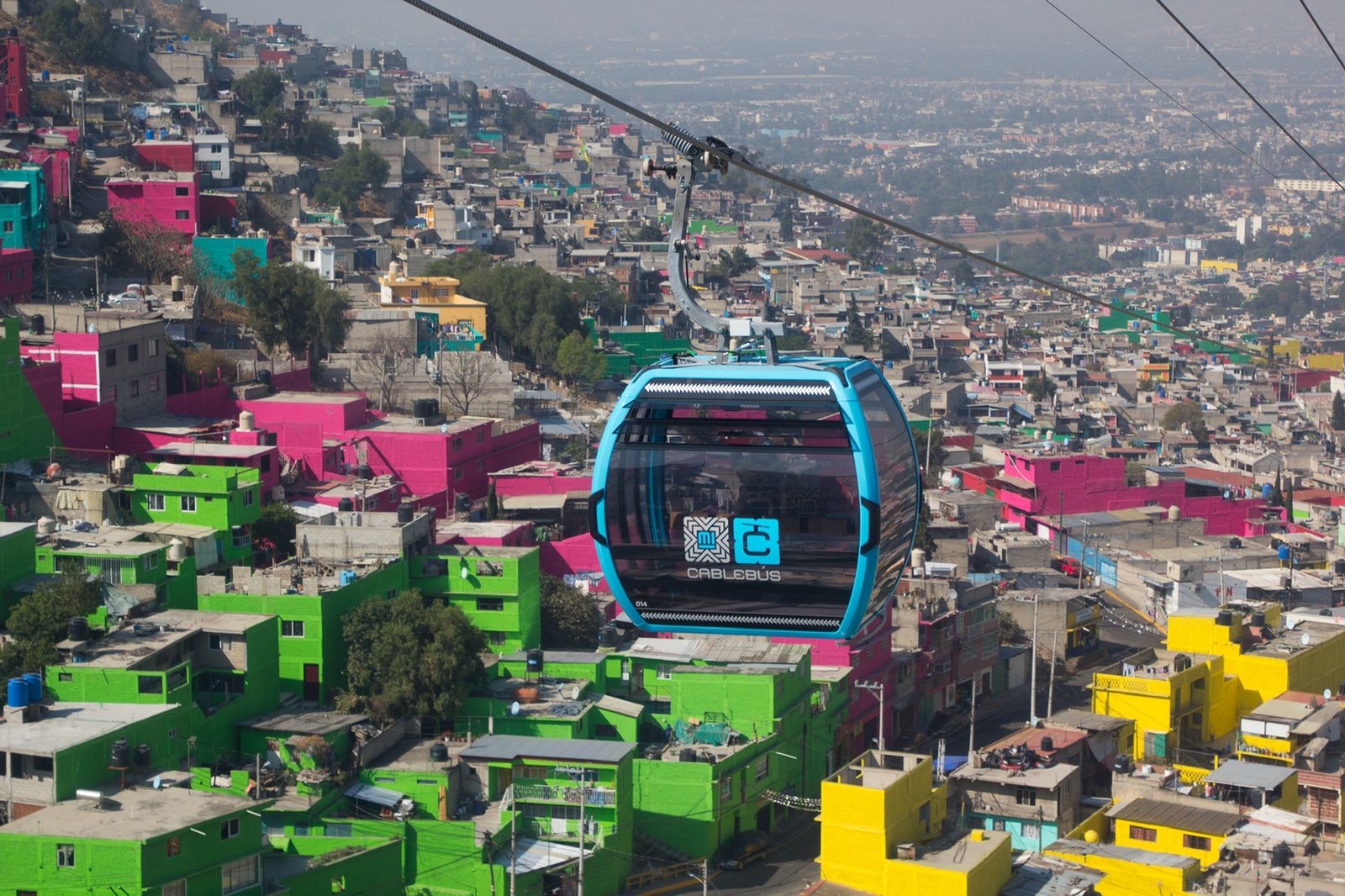 Almost 25 kilometers of cable car cross the sky of the Valley of Mexico. They are three lines of public cable transport that move thousands of passengers through difficult terrain. Two are in Mexico City and one in the State of Mexico. But the advance of this transport will not stop there: a new line in Ecatepec is under construction with 8.2 kilometers of extension and there is talk of plans for a cable car in Naucalpan and another in Magdalena Contreras-Tlalpan.

In just over four years the Valley of Mexico – that huge urban area where more than 20 million people live – has formed a modest network of cable cars. So far, none of the lines in operation have interconnection with each other, but it will soon happen: a new line will depart from a cable car station in the State of Mexico to Indios Verdes, in Mexico City, where Line 1 of the Capital Cablebus also arrives. .

More information:
“It’s a dream come true for Cuautepec”: Sheinbaum inaugurates Cablebús with the air of a rally

In a case study on cable transport in Latin America, the World Bank states that “although this system has been used mainly as a solution for mountain sports and other applications […] Many Latin American cities have invested in cable car infrastructure as a solution to the accessibility and connectivity problems of settlements on the slopes, mostly informal and with little services ”.

In the case of the Valley of Mexico, the first was the Mexicable. In October 2016, the first 4.9 kilometers of cable car were inaugurated in the municipality of Ecatepec, State of Mexico, where thousands of people who work in the capital reside. Through seven stations and 185 cabins, this route begins on Vía Morelos, runs through the town of Santa Clara, crosses the México-Pachuca highway, continues through the Hank González neighborhood and ends in the La Cañada region.

It took four years for the second cable car system to arrive: the Mexico City Cablebús. Line 1, which goes from Cuautepec to Indios Verdes, is 9.2 kilometers long and through seven stations and 377 cabins allows the inhabitants of the upper area of ​​the Gustavo A. Madero mayor’s office – the extreme north of the capital – to go down to the Center of Indios Verdes Modal Transfer, where they can board Metro Line 3, or Metrobús lines 1 and 7. And even with Line 4 of the Mexibús, which reaches Tecámac and will be extended to the Felipe Ángeles International Airport.

According to the Ministry of Mobility of Mexico City, 15 days after its commissioning to the public, Line 1 of the Cablebús was placed as the second busiest route in Latin America, with 56 thousand users per day. This places it just below the Purple Line of the cable car in La Paz, Bolivia, which carries 58,000 passengers a day. In third place, there is the yellow line of that same South American city, with 45 thousand people transported per day.

We recommend you:
Cablebús: schedule, rate, route, this you should know about the new cable car

In a few days, Line 2 of the Cablebus will be put into service. This route will be the longest in Latin America with its 10.2 kilometers in length. Through 308 cabins this route will allow the inhabitants of the Sierra de Santa Catarina, in the Iztapalapa mayor’s office, to go down to the Santa Marta station on Line A or the Constitución de 1917 station on Line 8, both of the Metro, and of this way continue your journey to the center of Mexico City.

In a few months the Mexicable Section II of the State of Mexico will be built. This new line, which has a work progress of 70%, will leave from the Hank González station of the Mexicable Section I to Indios Verdes, where it will connect with Line 1 of Cablebús, Line 3 of the Metro, lines 1 and 7 of the Metrobús and Line 4 of the Mexibús. With its 8.2 kilometers of extension, it will add to the 24.3 kilometers of existing cable car to add 32.5 kilometers of cable transport in the Metropolitan Area of ​​the Valley of Mexico.

Read:  Sebastián Córdova, among the five best footballers of Tokyo 2020 according to FIFA

It may interest you:
Ecatepec-Indios Verdes cable car is viable, but requires a greater environmental plan: Semarnat

But it won’t stop there. The head of government of Mexico City, Claudia Sheinbaum has said that by 2022 the construction of a third Cablebús line that interconnects the Magdalena Contreras and Tlalpan mayors will begin. Details such as the layout, investment amount, length or number of cabins are not yet known, but it has been manifested as a commitment of the current administration, so that the future 32.5-kilometer network will grow even more.

‘That are not fashion’

For the deputy director of the Sustainable Development Goals Initiative (ODS) of the Tecnológico de Monterrey, Mariajulia Martínez Acosta, the cable car is a solution to immediate mobility needs, such as approaching neighborhoods located in high areas or ravines of the city with other mass transportation systems, but it is not the only solution in terms of travel in the Valley of Mexico.

In an interview with Forbes Mexico The also master in Planning and Territorial Ordering from the University of Madrid points out that so that the construction of cable cars does not become a fad and the risk of not building massive transport systems is run, a master plan must be drawn up that identifies the needs of mobility of the high and ravine regions of the Valley of Mexico and feasibility and cost-benefit studies are prepared for each project.

“I think it would be good to know the cost-benefit analysis of increasing this cable car network. What am I going to do? They are a solution, they promote mobility and bring the colonies (in high areas) closer, but it is not about having the sky full of cable cars. We should study what other mobility options can have a greater impact. I understand that developing a Cablebus is cheaper than a Metro line, however, the impact that a Metro network can have is greater ”, he says.

Do not miss:
Cable cars, safer than airplanes: builder of Cablebus Line 1

And he adds: “the issue is to generate mass transport options, quality, higher volume, and not after a while having 10 cablebuses in Mexico City and others in the State of Mexico, when there are options that can be more expensive, they can take more time, but have greater benefits ”.

It is still too early to evaluate if Cablebús Line 1 is really transferred to the people who were calculated, or more, he said, but “we are going to see if in one or two years people continue to use it, because they can realize that the Stations are very far away and there is no safe feeder service, and not that it was just that it was full because people were going to take the photo ”.

“From my point of view, perhaps we could make an evaluation in the short term to one year, in the medium term about five years and in the long term 10, to see how the dynamics of this transport system will be. Now it is a fad, (also) it is solving very immediate mobility problems, but in the long term we do not know if it will really have a positive impact, or in a year only one person will travel per cabin ”, he leaves the issue on the table the teacher Mariajulia Martínez.