By CarterSeptember 28, 2021No Comments6 Mins Read 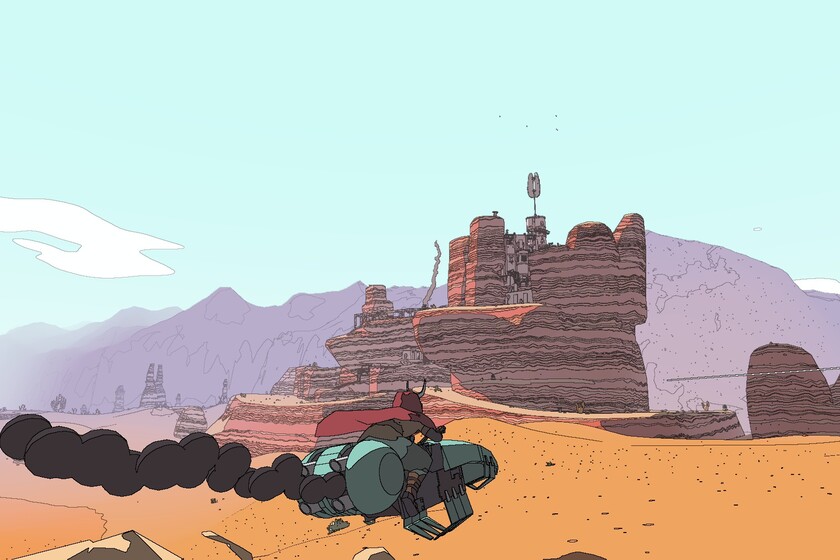 Sable is one of those indies that cannot be missed at any of the main video game fairs. In each and every one of them, Shedworks has managed to catch us with a artistic direction similar to that of the Moebius comics added to a world that is also quite promising. Of course, a server was also curious about the game, so I did not hesitate to try the demo.

At the time, I had a bittersweet feeling because what I saw there was an amalgamation of mechanics drawn directly from The Legend of Zelda: Breath of the Wild applied to errand missions: go here and interact with such. Well, it wasn’t really cool, really. But I must admit that playing Complete version, that opinion has changed a lot. For good.

I think Sable does two very specific things well. The first is carve out an identity Through the art. And that is not just a matter of aesthetics, but something deeper. Sensations There is something powerful — romantic, actually — in seeing our protagonist gently floating through the desert aboard her ship while delicate melodies play in the background. It’s like noticing the wind lulling the bike, a beauty. The other thing it does well is a level design which offers a lot of freedom.

Exploration motivated by your curiosity

Shedworks is well aware that Sable’s stronghold are those such magical moments, so the whole game revolves around the same thing: you are a girl who, following the traditions of her tribe, ventures into the ocean of sand to discover the world. We’re used to open world games telling us exactly where to go and what to do, but things don’t work that way here.

You arrive in a new region and the most logical reaction is to climb some mountain, take out the spyglass and use it to mark anything that catches your attention on the horizon. A watchtower? Good: there is almost certainly a cartographer there who will sell you a map. The same with cities, villages, anything lost in the middle of nowhere. You go there without knowing very well what you are going to find, and you will almost always find something what counts his own story.

It will be a character or group of characters, perhaps a notebook or perhaps an abandoned ship with the records of its old crew. That is the least. None of that sounds very different from what countless current games offer. open world, but it is that this, as I say, does not guide you. You have a compass so that you know in which direction the site you must visit is to advance in the mission, but you prefer that you manage as you can to get there.

All the things that are out there have a why — animals, places, merchants or whatever — and the grace is in discovering them, understanding them and doing whatever those adventures propose. Sable does not understand main and secondary missions. Quite simply, things happen in his world, and a good part of those things go to your menu so that you can keep track of them, get an idea of ​​what you do. It’s like putting a travel journal on a 2004 game, the kind that takes for granted that you have enough curiosity to find out what is happening around you.

A game about solving problems

Following that same philosophy of explore at will To “get wet” in the things that happen in the world, Sable allows you to cover each situation in various ways. There is no combat system here, so things work out thinking a bit. Or a lot. Let’s look at a practical example, okay? Good: During the tutorial, you are assigned the task of collecting three beetles. Simple. In fact, it is the simplest thing you can find in a video game.

Except it isn’t, because said beetles are high up in some mountains. And you have it difficult for climb them, because Sable’s stamina bar is consumed very quickly as soon as it grabs onto a wall. But it is also that, once you get to the top, the bugs don’t get caught just like that. If you have spoken with the granny in the village, you will know that you have to throw a specific fruit at them as a bait so that they ignore you and thus be able to capture them from behind. What if it is not the case? Well then you have to deduce it your. Or look it up on the internet.

You have to climb this tower, but there are many ways to do it. (Credits: Shedwor

Shedworks really likes that pattern, because there are a lot of missions set up that way. And the truth is that it works very well because it achieves that trivial exercises they feel like boss fights. This is not an exaggeration. I remember that in the second region of the map, I had to enter a cave guarded by a huge insect queen. If you searched around the area, you would find a annotation that talked about a fruit that attracts the queen to let you pass. I, who am that donkey, decided to climb the mountain and enter through the exit. It was easy? Not at all. But it was possible.

And I have many examples like that, which occur between more complex missions like solving a robbery case. Looking for the culprit, yes, Sherlock Holmes style. The thing is, Sable doesn’t care too much about how you blow up his sandbox as long as you make it yours. Nothing feels too strict or predetermined. It is as if I give you a piece of furniture to assemble and I leave you the instructions out there, but I don’t force you to read them. Frankly, it’s the only game – or one of the few games – that understands what Liberty. I have not completed many areas “to the letter”, and I do not regret it: I have done them as I wanted, which is fine.

Sable’s story is about a girl who leaves her tribe to face the vastness of the world, its people, and its secrets alone. The gameplay is just as liberating– invites you to forget about waypoints, interfaces and corridors; inviting you to be guided rather by curiosity, logic or personal desires. It has a lot of bugs, quite poor performance and that effect of cel-shading so striking does not always look as good as we would like, but at the end of the day we talk about a game of sensations.

Shedworks has been based on the mechanics and animations of The Legend of Zelda: Breath of the Wild, but has been able to give a 100% own sense to the adventure genre. An absurdly good, cool one that turns any little messenger chore into an odyssey of microscopic problems that is nice to solve on the fly. And in a way, it’s a well-deserved slap on the wrist for other similar games – it doesn’t take high ambitions to create a fun game. Satisfactory. Significant.