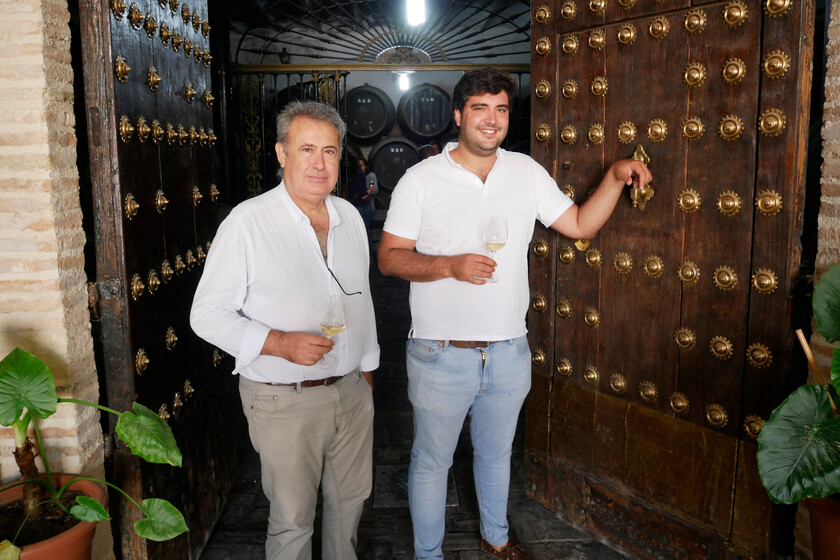 What do the looting of the Odyssey, the fortified wines and the Spanish royal family have in common? All the stories converge in one of the best kept secrets of Montilla (Córdoba): the lagar de La Inglesa.

This mansion, whose history dates back to the beginning of the 19th century, today belongs to the Doblas family, and it houses some of the oldest fortified wine casks in the world, of which hardly any bags have been made. A treasure of those that no longer remain.

The founder of the family business, Antonio Doblas Alcala (1927-2015), he was a successful businessman during the Franco regime. Of humble origins – he started out as a goatherd – he ended up being a personal friend of Juan de Borbón or Manuel Benítez The Cordovan (He was, in fact, godfather to one of his sons).

In 1974, Doblas bought the palace from the Alvear family from La Inglesa. This estate treasured the winery of the mythical Montilla winery, as well as the wines for family consumption, since, in 1807, Diego de Alvear and Ponce de León build there the palace in which he lived with his second wife, Luisa Rebecca Ward, better known in the area as “the English”. A palace that, although it burned down and was built again at the end of the 19th century by the grandson of the famous sailor, Francisco de Alvear (better known as the Count of La Cortina, one of the great promoters of the Montilla wine industry), it preserves an English style, very peculiar in the area.

The lagar de la Inglesa is located in a privileged place in the Sierra de Montilla.

Diego de Alvear met Luisa Rebecca in London, where he was taken prisoner after the English army attacked the flotilla in which he was returning from Argentina, with his first wife and ten children. The Montillano was saved from certain death Thanks to the fact that, despite being a passenger, he had to replace one of the captains of the fleet who fell ill before leaving the port. Because of this, he and his first-born, Carlos María, were not on board Nuestra Señora de las Mercedes, the frigate that shot down the English navy and whose remains were not found until 2007 by the American treasure hunter. Odyssey Marine Exploration, whose history is well known.

What few know is that it is in the La Inglesa palace where all the expedition’s record books are kept, which had to be consulted, in fact, during the trial thanks to which the Spanish Government recovered the treasure that Odyssey had taken to America. Doblas Alcalá himself, together with the Alvear family, tried, without success, to have the treasure exhibited in Montilla, and not in Cartagena, where it has finally ended. But let’s get back to the wines. 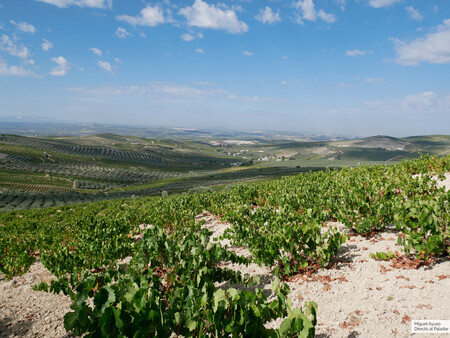 The La Inglesa vineyards are located in the superior quality area of ​​the Sierra de Montilla, dominated by albarizo soils. The harvest took place at the end of July.

The culture of patience

Despite the fact that the Doblas had some of the oldest Amontillados in Montilla-Moriles, which are surely among the ten oldest fortified wines in the world, the breeding of wild cattle and the olive grove they focused almost all of their entrepreneurial efforts. The winery continued to operate, but for family consumption and very limited sales. They were, in short, losing money to her.

Just a few years ago, the third Antonio in the family, Antonio Doblas Cuenca –In the opening photo, on the right, with his father–, who has trained as an agronomist, decided to lead the rebirth of La Inglesa, bottling fine en rama, fine soleras and amontillados, which are about to be reach the market. 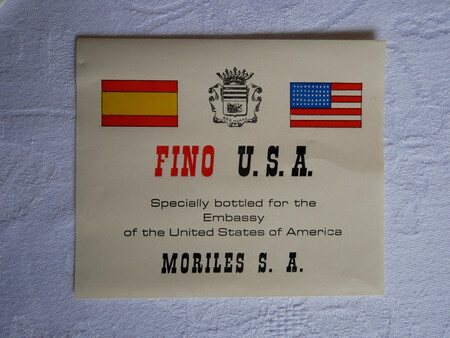 Old wine labels are preserved in the palace, like this one that the family made for the United States embassy in Spain.

For this company he has had the help of Santi Carrillo, sommelier of El Corral de la Morería, who when he visited them could not believe what they had in hand. Their fortified wines, made over three generations, were of unsurpassed quality, but for years they had only been sold in very limited batches to friends and special clients, from the Royal Household to the United States Embassy in Spain.

Although Carrillo is a native of Córdoba, he was already used to the hustle and bustle of a Michelin star in Madrid, and he was greatly surprised by the ease with which the family handled their wines. If a fine boot did not convince them, they simply cornered it on one side of the cellar. Something good would come out. And boy did it come out. It is what the sommelier defines as the “culture of patience.”

Read:  How to quickly and easily roast and peel hazelnuts at home 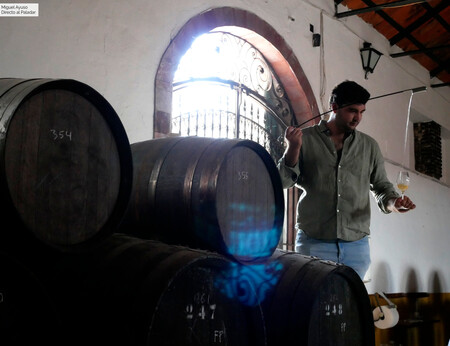 Antonio son venencia one of the boots of the winery of the ugly ones.

The objective of La Inglesa, however, is not to live from the past, but vindicate the good wines of Montilla-Moriles, a designation of origin that has always been in the shadow of Jerez, despite having its own idiosyncrasy.

In La Inglesa they neither clarify nor lead, a very widespread practice in Jerez, but not in Montilla

The family has another winery -the winery of the ugly, located in the town of Moriles– where a white with a flower veil is made (a tribute to the ancient wines of the area) and fine wines, all en rama. In La Inglesa they do not clarify or filter. Nor do they lead, a very common practice in Jerez that consists of adding alcohol to the wines to fortify them, but which is not necessary in Montilla-Moriles, where the wines gain alcohol more easily with aging, in a natural way.

From the press of the ugly comes the fine branch, aged between 7 and 8 years, and the best of these wines go to the palace which, being higher, has the ideal conditions for further aging. “Here we stay in seven or eight years, with biological aging, and from then on we started in the English, with oxidative aging,” explains Carrillo. “Here you are in the countryside at 100 m from sea level, at the top you are at 650. The upbringing is much more refined, it has much more electricity.” 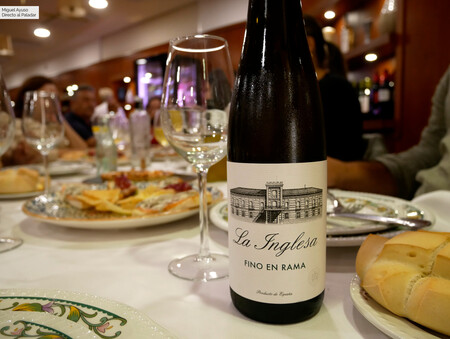 Montilla-Moriles wines were known in times as the southern Rieslings, which has helped La Inglesa to choose an Alsatian-type bottle for marketing.

One of the most particular wines of La Inglesa is of an almost extinct category, the fine past. This wine remains on the edge of the Fino and Amontillado: oxidative aging is about to begin, but with touches still typical of biologically aged wines and a veil of black flower, which is now about to disappear. It will be marketed for the first time next October: only 500 50 cl bottles of the autumn bag.

All the wines are also selected according to the season. “The set of fine slabs for the autumn sack it is already made and there are 14 boots, out of a total of 110 ”, explains Carrillo. “Around 10% of what we have in rearing. We tasted last week and we have thought that those 14 boots are the ones that best represent the wine in the autumn season. In winter it will be those 14 or different ones ”.

A enormous task of tasting, from which arises one of the most curious traditions of the fortified wine cellars, the spending boot. In this vat the remains of the jugs of the wines that are tasted and used for the personal consumption of the workers of the winery are thrown. 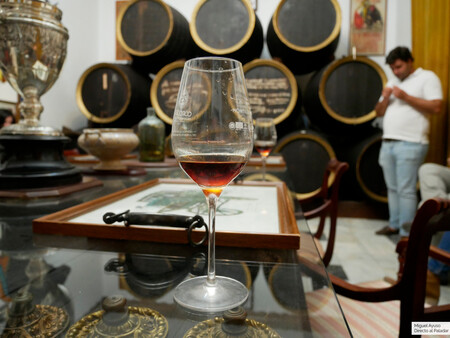 The wine from the foundational cask, which rests in the sacristy of La Inglesa, has a lot of alcohol given its exceptional longevity, but it still has a certain freshness. Juan Manuel Del Rey, alma mater of El Corral de la Morería, classified him as “a Mihura dressed in a tuxedo.”

Nothing to do with the most famous boots of the company, such as the 110, an amontillado that began to be made in 1927, or the jewel in the crown, the foundational boot or zero boot, the oldest of the winery that the Doblas family estimates, contains wine that dates back to the time when the current La Inglesa mansion was built, around 1870.

From this zero boot, which is kept in the palace sacristy along with the rest of the hundred-year-old boots, only two sacks have been made in all of history: one for the Royal House and another for El Corral de la Morería, which serves the wine in its super premium pairing. The winery plans to release an “old” and another “very old” amontillado soon, but no one is considering re-bottling the original cask at the moment. To do so, it would not be easy to establish a price, although we are surely talking about thousands of euros for each 20 cl bottle. They are major words.

Are you capable of not getting them while on Amazon?

Getting stuck in an Uber can be expensive: $400 after 14 hours in a snowstorm | Motor

Does honey with lemon really help in the treatment?