A grill in Huércal de Almería gives away chicken to the needy, Health does not like it and people turn to donations 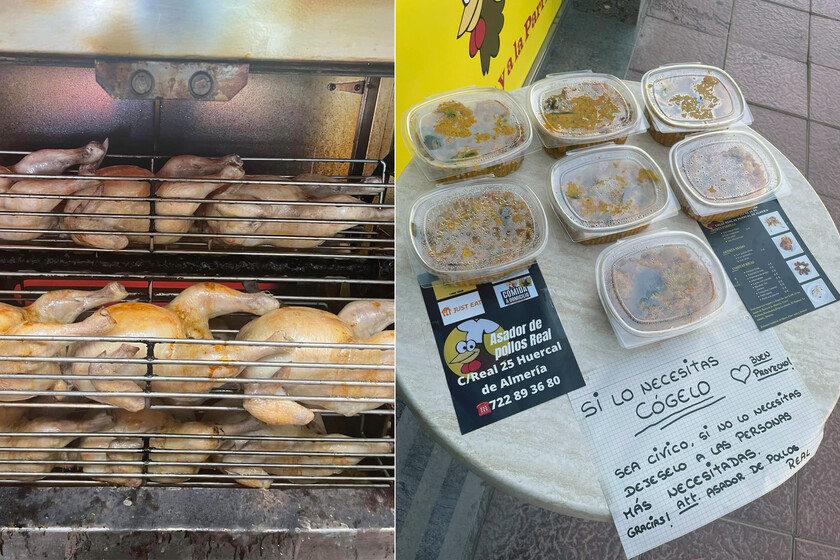 The story of the Real chicken grill, in the Almeria town of Huércal de Almería, is one of those that is comforting to tell, despite the fact that it reflects a dramatic social reality. Aware of the economic difficulties suffered by many of their own neighbors, for a few weeks every day they have prepared grilled chicken rations left at the door for those who need it most, totally free.

Managed by the marriage that they form Patxi Ramón and his wife Cristina The grill has been offering, in addition to roast and grilled chickens, various home-made dishes to take away for three years, adjusting prices to the maximum, aware of the difficult economic situation we are experiencing. But for some residents of the neighborhood it was even a luxury to be able to buy some of their rations.

It all started “for an older woman from the town,” Patxi told the program Andalusia Direct; “for an older woman who had no resources and rummaging five euros in her bag, and that’s how everything was born.” Realizing that there were many people who needed help to be able to eat hot every day, first they launched a menu at five eurosuntil another meeting motivated the couple to go one step further.

“We saw that around the 15th or 20th these older people no longer had resources, they even showed their bank records. And one day with this man who he came with tears in his eyes and very sorry, from here in town, we decided to take out the table. We didn’t really think about it, I took out the table and there a man burst into tears.”

Patxi refers to a bricklayer, a neighbor and an acquaintance in the neighborhood, who came desperate one day asking for something to eat. According to what he tells EFE, the anger of impotence led him to prepare a potato omelette, and cleared the table to leave more food. Since then they leave several rations daily prepared at the doors of the premises, without surveillance, with a simple sign that reads: “If you need it, take it. Be civil, if you don’t need it, leave it to the most needy people”.

The initiative was quickly well received by customers and neighbors, who even began to make donations and buy an extra chicken that they also left on the table. Every day they prepare rations from between eight and twelve chickensalso adding some other dishes, such as rice dishes or homemade stews.

By spreading the word in the local press and social networks, more people have been able to benefit from this solidarity initiative, but they have also run into the obstacles of the legislation. And it is that, as anticipated The Journal of Almeriareceived a notice of upcoming health inspectionas it is not allowed to leave prepared food outside without refrigeration.

The new fridge just installed thanks to the donations received.

Fortunately, donations from neighbors and customers have allowed the grill to acquire a suitable hotel fridge to be able to comply with the regulations and that their chickens and solidarity meals are not under health risk, nor under threat from the authorities.

Taking food out to the street allows those who may need it not to have to face the possible embarrassment or the rush to order. And, according to Patxi, nobody gets a free chicken for the face if they don’t need it. He also assures that they will maintain the initiative forever if necessary, as long as people need it.

In DAP | Ministers Garzón and Díaz meet with supermarkets and consumers to request a limit on the price of food
In DAP | Food banks continue to provide food, but ask for help to face a critical situation: “We are overwhelmed”