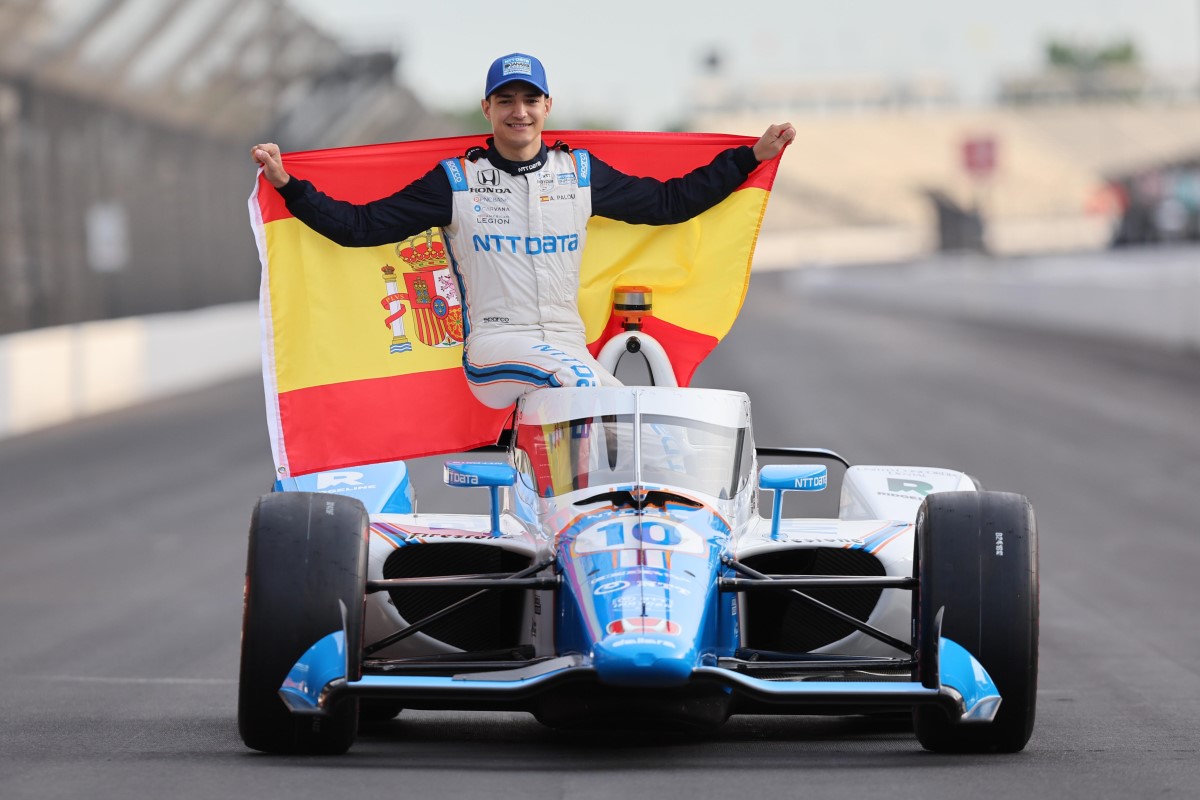 Things in Indianapolis are back to how they were before, and at the same time, they are like never before. After two editions affected by the pandemic, more than 300,000 spectators will once again pack the venue in the world’s biggest one-day show. For the second year in a row, and fifth overall, Scott Dixon will lead the 33-car field to the green flag, starting 200 laps and nearly three hours of frenetic action. Everything looks so familiar even the speeds have returned to being “what they were”and even beyond.

26 years later, Dixon broke the pole position record last Sunday, something that seemed unthinkable just a few years ago. Averaging 234.046 miles per hour, the New Zealander entered his name in the history books by beating the record of 233.718 by which Scott Brayton should have led the 1996 grid had it not been for his fatal accident in later practice. Some numbers that, in the 105 previous editions of this test, only find a replica in the 236,986 that Arie Luyendyk recorded on the second day of qualifying that 1996a record so stratospheric that it continues to raise murmurs to this day.

In turn, and despite the lack of competition to complete the last row, the grid has once again raised the bar with the highest global average in history for the second consecutive year. With 11 drivers lapping faster than the best average of 2021, the total grid average is 231,023 miles per hour, clearly higher than the 230.294 mph of 2021, despite the fact that the two slowest qualifiers this year signed a worse average than the 33rd classified of 2021 (Simona de Silvestro). In fact, the average falls short of 33 cars as Stefan Wilson failed to qualify on Saturday due to mechanical problems, but the record would still have been broken if Wilson had averaged just shy of 207 mph, almost jogging speed.

Among the 33 participants, there are eight previous winners of the Indianapolis 500one less than in 2021 due to the absence of Ryan Hunter-Reay, and a total of seven rookies, equaling the highest number of the last decade registered in 2014. Three of them are Americans, something that had not happened since 2006, and that brings the number of national pilots to 13 compared to 20 foreigners, half of whom occupy the practice all of the first four rows. In short, all the right ingredients are gathered for an Indy 500 that has already gone down in history, and that wants to do it even more.

For the seventh time in history, all in the last 16 editions, the front row of the Indy 500 does not feature any American drivers. Being this your fifth pole in this testDixon is the 12th driver in history to chain two in a row, and he has done so with some scandalous numbers that he hopes to use in his favor to get a second Indy 500 that has resisted him time and time again. No one has racked up 13 failed attempts before winning this test, but Dixon is used to doing things no one else can or knows how to do, and his team has come in more prepared than ever to give him the car he deserves. Without going any further, a teammate of his will come out with him, as happened in his distant victory in 2008.

Álex Palou finished last year’s edition with a bitter second place, and from that place he will start this Sunday, completing the first one-two on the grid for a team since 2010. Taking over from Oriol Servià in 2011 as the second Spaniard to start in the first row, the current IndyCar champion will seek to take advantage of everything learned in these 12 months to continue making history. At his side, another talented generational colleague, Rinus VeeKay, who has not dropped out of the top 4 on the grid in his three years at the Indy 500, who signed the best lap of the month in qualifying on Saturday (234.742 mph), and who continues in position to be the youngest winner in the history of the event at 21 years old.

Located in the same row as last year, two of the most experienced drivers in the Indy 500 they want to follow in the footsteps left by the last winner and win in Indianapolis despite not playing the full season. Ed Carpenter, the only American in the top 10, continues to chase the victory that has so often eluded him, and Tony Kanaan prolongs the twilight of his career with a car so blazingly fast at race pace that in his hands it is capable of anything. . Marcus Ericsson will start in the middle, whom his good work in Indianapolis has never translated into a great result, an aspect that it will seek to exterminate with a stroke of the pen. Second Swedish winner in history?

The media attention of this row is also concentrated on its ends. Pato O’Ward starts from the inside, recently renewed with McLaren SP and knowing that a victory in Indianapolis would notably boost his Formula 1 aspirations. On the outside, the famous debut of Romain Grosjean, the best of the seven rookies on the grid and the only Andretti Autosport driver in the first six rows. The Frenchman seems to have overcome his aversion to ovals, although his performance in his race is still unknown. He is separated by O’Ward’s partner, a Felix Rosenqvist who finally seems have found some comfort in ovalsvery necessary for its uncertain future in the short and medium term.

Read:  The only F1 driver Alonso fears: "He is the favorite for the next few years"

Without a doubt, the fourth row is the most illustrious of the test, with two previous winners and a posh rookie. After signing for Coyne, Takuma Sato may have fastest race car on the grid and he has shown that he has not lost a single iota of his banzai style, so the possibility of a third win does not seem far-fetched at all. Far less than that of a second Will Power victory, which follows suffering from Penske’s performance issues at Indianapolis in this triennium of the Aeroscreen. Still, Simon Pagenaud’s 23-place comeback in 2021 to finish third proves that this team can never be written off.

Many lights will be on, however, in the presence of Jimmie Johnson, who has competed 18 times and won four more in Indianapolis, but who has never faced anything like this. The seven-time NASCAR champion, immersed in his second single-seater season, has also overcome his initial refusal to submit to the high speeds of single-seaters on ovals at the age of 46. He is still a pilot with a special goblin in this kind of landAnd if his strong performance all month and his sixth-place finish in the Texas race are any indication, it could be a fun Sunday for his fans.

Faced with the drought of Americans in the top positions, it contrasts a 100% American fifth row, something that hadn’t happened with such a high rank since 2006, and all with different levels of experience. Rookie David Malukas has a good car despite his accident at Carb Day, two-time champion Josef Newgarden goes in search of the last jewel that is missing from her crown to consecrate himself as one of the great drivers of his time, and Santino Ferrucci’s spectacularity on ovals guarantees strong emotions in a race in which he hasn’t dropped out of the top 7 in his three attempts.

New team and new life for Simon Pagenaud, the 2019 winner, who doesn’t seem to have it all in for a second win, although he didn’t look like it last year before his big comeback. accompany you two pilots with different pending accounts in Indianapolis: none as big as the one dragged by JR Hildebrand after his notorious accident in 2011, now leading the contingent of a quite lost Foyt team in this edition. Luck has also been elusive for Conor Daly, who was prevented from fighting for victory last year by a tire that fell from heaven, and he will seek to find that rhythm again after a disappointing qualifying.

This will almost certainly be the last time Alexander Rossi competes in the Indy 500 as a driver for Andretti Autosport. After two years of ups and downs that have been reflected in these two weeks, the American will seek close the circle that began in his sudden rise to fame in 2016 with a second win. At the start, he will be flanked by a confident Callum Ilott in his first Indy 500 looking for a big result, and a Graham Rahal who has hovered too many times for glory. without getting a real chance that doesn’t seem likely this year due to poor computer performance.

Being two pilots that participate only in this test, Sage Karam and Marco Andretti want to take on the prominence that the development of their very different careers has not given them in terms of results. Not surprisingly, Karam seems to have one of the best cars in race setup, while Marco Andretti hopes not to repeat the chain of misfortunes that sank him in qualifying. Completing the row is rookie Devlin DeFrancesco, involved in three incidents in a row on his oval debut in Texas two months ago, and badly in need of a good day after a disastrous start to the season.

Almost always, some of the last rows are surprising due to the forcefulness of their names, and this situation occurs in this edition with the ninth row, where the brand new four-time winner Hélio Castroneves. The Brazilian has a great race car, but his 27th place forces him to make an almost perfect comeback for a fifth victory that would leave him alone on the Olympus of Indianapolis. For his part, Colton Herta was affected by an engine failure, and Scott McLaughlin lost eleven positions with a failed second qualifying attempt, so both will have a lot of ground to recover to settle their unresolved issuesespecially that of a Herta who has never achieved a podium in ovals.

McLaren SP still can’t find the key to make its third car in the Indy 500 run. It happened to Fernando Alonso two years ago and it has happened in the last two editions to Juan Pablo Montoya, whose objective will once again be to make juice from a squeezed fruit as in his top 10 of 2021. The rookie Kyle Kirkwood, current champion of Indy Lights hopes to build on what he learned in Texas two months ago to be spectacular without ending up on the wallas it did on Monday to a Dalton Kellett who will seek to finish in the top 20 on his third attempt.

The disastrous speed of Rahal Letterman Lanigan Racing cars it is reflected in the presence of its two new drivers, Jack Harvey and rookie Christian Lundgaard, in the back row. Both have suffered greatly, and surely they have been grateful that there were not more than 33 cars this year, especially the Dane, who seems tremendously uncomfortable in the car. Rounding out the grid is Stefan Wilson, in DragonSpeed’s collaborative effort with various teams to have 33 cars, and who was prevented by a mechanical problem on Saturday from showing that he had the speed to get out a few rows higher.

Automakers ask for a plan to electrify their production in Mexico