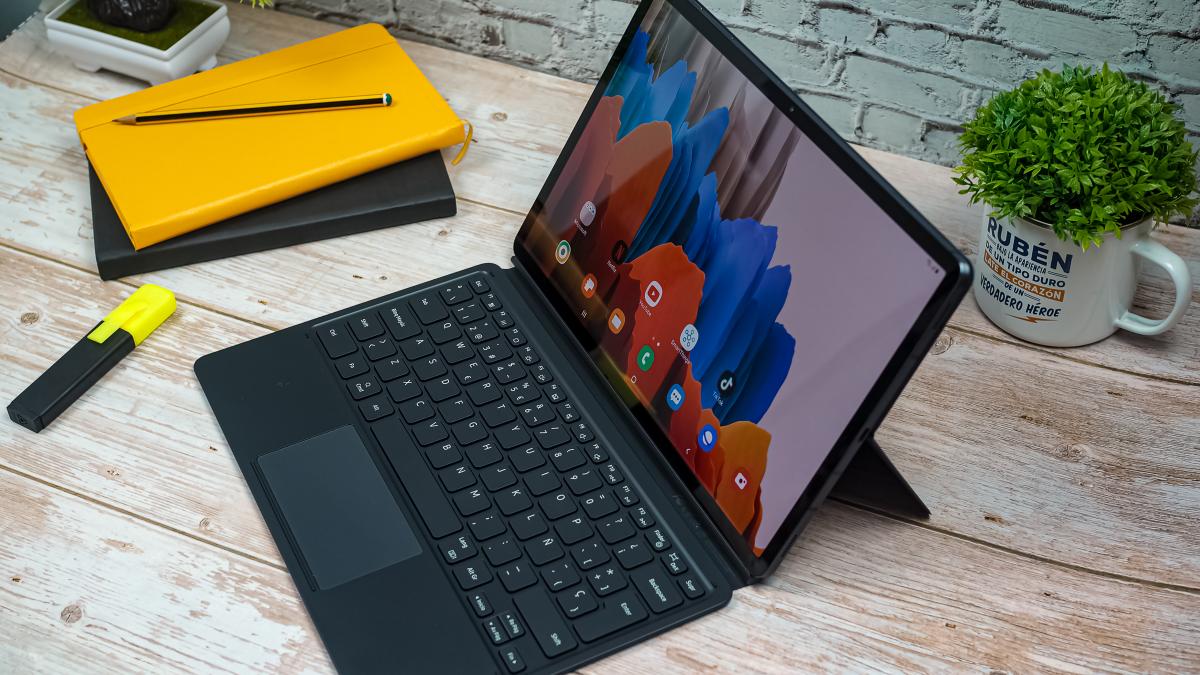 The world of tablets is no longer what it used to be. With the arrival of the ultra-fast processors that some brands even insert into their laptops, the differences between a tablet and a laptop are less and less.

But not all tablets are the same. There are some that use the latest processors, more RAM and higher quality displays plus some accessories that really make it a laptop substitute.

We selected some of the most powerful tablets you can get right now, with the possibility of adding a keyboard and mouse to work as if it were a laptop.

These tablets do not lack anything, but perhaps the most important thing is that finally both Android and iOS have adapted in the world of the tablet to a traditional desktop mode, with several applications open at the same time and even floating windows.

The benefits are above all the ease of transporting them, they are lighter and sometimes with more batteries than laptops. What’s more, as a general rule they are usually cheaper.

Against it there is surely the lack of specific applications that you may miss, especially professional applications that are only available for Windows. But if you are a person who usually spends the day in the browser, Word, Excel and similar applications, you will not have a problem.

The most powerful: Apple iPad Pro

The new Apple iPad Pro with 11-inch Retina display and the new M1 processor. One of the most powerful and capable iPads from Apple.

Apple’s new iPad Pro it is one of the most powerful tablets in the world. All thanks to the M1 processor that they use in several of their Macs.

iPad Pro comes in two sizes, the 11-inch being the smallest and easiest to carry, but you also have the 12.9-inch option that is fine to work with, but to use it as a normal tablet it may be too big.

The ProMotion screen, that is, with 120 Hz refresh. It makes transitions and animations an experience that will ruin other screens, plus it has a 12MP wide-angle camera, a 10MP ultra-wide angle camera and a LiDAR scanner.

The new Apple iPad Pro with 12.9-inch Liquid Retina XDR display and the new M1 processor, 12MP wide angle, 10MP ultra wide angle and LiDAR scanner. One of the most powerful and capable iPads from Apple.

It even has a USB-C port with support for Thunderbolt and USB 4 to which you can add a hub with which to increase its connectivity. What’s more you have iPadOS 15.

The most powerful on Android: Samsung Galaxy Tab S7 +

With the 12.4 “Galaxy Tab S7 + WiFi tablet you will have a screen dimension that will allow you to enjoy the laptop experience on an android tablet.

Samsung Galaxy tab S7 + It is the most powerful and premium tablet from Samsung. It is one of those tablets that looks on all sides and has an impressive 12.4-inch 120Hz Super AMOLED display.

As we discussed in our analysis, this tablet stands out for its screen, performance, hardware and the excellent integration it has with S-Pen, the digital pen that is included.

Use the Snapdragon 865 Plus processorIt has 6 GB of RAM and in this version it has 128 GB of storage, although you can also choose 256 GB.

In addition to having WiFi, there is a version compatible with 5G networks, so if you have a SIM from an operator with these networks, you can take advantage of the maximum internet speed wherever you are.

Best of all, Samsung’s most powerful and highest-end tablet is now on sale. It will only cost you 789 euros, that is to say, 110 euros less than normal.

This tablet with a 2K OLED screen also has a lot of power thanks to the Snapdragon 730G as a processor. In addition, it has a fast charge at 20W.

Lenovo plunges into the world of high-end tablets with this Lenovo Tab P11 Pro. It is one of its tablets that can be turned into a laptop thanks to its keyboard with trackpad that is also a cover.

It’s very thin, only 5.8mm thick, making it one of the thinnest in its class. It also has a 8,600 mAh battery which offers an autonomy of about 15 hours of use.

Now you can get this version with 6 GB of RAM and 128 GB of storage (expandable with microSD) for 527 euros. There is also a lower version with 4 GB of RAM.

But the best offer you can get is this tablet and also the digital pen and the case with keyboard and trackpad for 495 euros.

The alternative to Android and Apple: Huawei MatePad Pro

This high-end tablet from Huawei has a Kirin 990 processor and power to spare, and it also has 5G connectivity.

Huawei has one of those Android tablets that is powerful, has a lot of potential as a laptop replacement, and looks good too.

With an excellent design and reduced edges, this Huawei MatePad Pro has a 10.8-inch screen and Full HD resolution.

Uses a Kirin 990 processor with Mali G76 GPU, very similar to its Snapdragon equivalents in terms of performance. It is a very powerful tablet with a large screen and an excellent design thanks to its 4 speakers.

Against it it has that although it uses Android, it is a version without Google services, that is, without access to the Google Play Store and the available applications. It has its own app store, but it is smaller. Of course, it has an application search engine to download the traditional apps that you will need from other sources.

You can get this Huawei MatePad Pro for 449 euros in the Huawei online store, that is, with 100 euros discount.

The same version is found for 649 euros on Amazon. Don’t forget to check out this complete analysis that we have published on ComptuerHoy.com.

With Snapdragon 750G and a 12.4 “screen, this Samsung tablet stands out for including S-Pen, good performance and a low price for its features.

One of the alternatives to the highest-end tablets is this Samsung Galaxy Tab S7 FE. Although it is not the most powerful, it is an option that works perfectly as a replacement for a laptop.

As we discussed in our analysis, where Samsung has cut to make this tablet more accessible is on the screen, which is 60 Hz and has a lower contrast as it is not AMOLED. But it has a good size of 12.4 inches and a good level of brightness.

Among its advantages is that it includes a 5G connection, S-Pen in the box and also the option of getting a keyboard and cover that is perfect for turning it into a laptop.

If you like to keep up to date with the latest offers and product recommendations, you can follow them in real time on the Computerhoy.com channel on Telegram, where we will keep you informed of the latest technology discounts.

You can get all these tablets on Amazon with free and fast shipping as long as you sign up for Prime. You have a 30-day free trial with no obligation as there is no permanence.

If you are a student Prime Student test. It maintains the same advantages of normal Prime but with a 3 month free trial and an annual subscription with a 50% discount.

In this article, ComputerHoy receives a commission from its affiliate partners for each purchase you make through the product links that we have included, something that in no case represents an additional cost for you. However, our recommendations are always independent and objective. You can check our affiliate policy here.

A new law regulates the commercialization of olive oil and prohibits...