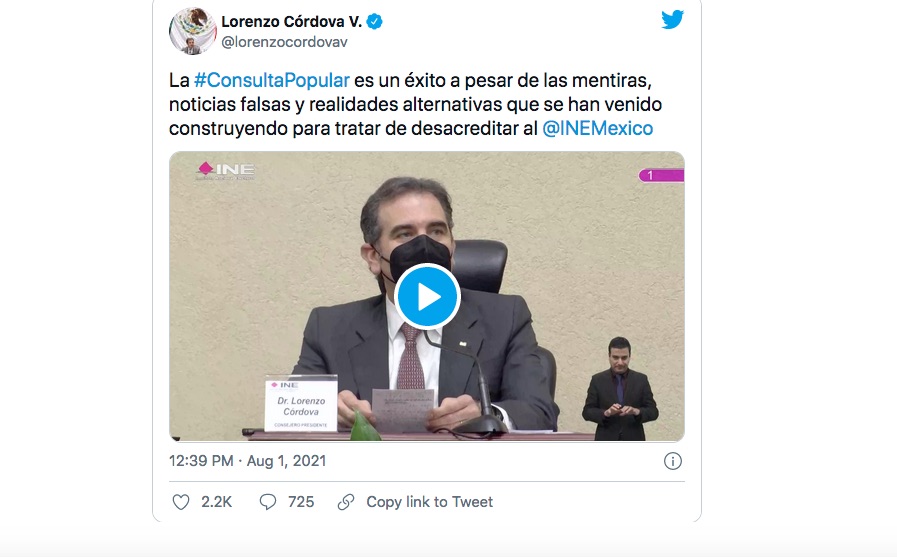 Sprout Social Y Survata listed those they considered the main successes of a Community Manager, when you post on social media. We have used their recommendations to identify a battery of cases, which help us to see how the Popular Consultation was experienced from social networks.

The use of videos

Videos taken by accounts with all kinds of followers like @elitvoficial with more than 23 thousand followers showed the moment when, together with @MeMeyamelCA they were shown after having participated in the Popular Consultation.

Other videos such as the one released by the president of the INE, Lonrenzo cordova, had taken advantage of the publication of a video to acknowledge that the Popular Consultation exercise had been a success, despite false news and those that said, “alternative news”, which were launched against this Consultation on social networks.

In other anecdotal videos such as that of SoniaT, it showed how a voter was being accompanied by his dog and they were in line waiting to vote.

The #Referendum is a success despite the lies, fake news and alternative realities that have been built to try to discredit the @INEMexico pic.twitter.com/7kUuR68UaZ

The CM of the INE had a fundamental activity during this Popular Consultation and that is that it became one of the main sources of information during this exercise that took place this Sunday and that generated all kinds of questions on the networks.

The responses in real time have been fundamental in this exercise, especially to queries made by users such as @ jcabralc99, who contextualized the CM by warning him that in the box he presided over they were victims of armed robbery, so he asked what should be done Faced with this fact, motivating the Institute to ask you to notify your electoral trainer of the incident.

Have you already notified the Electoral Trainer of the situation?

The lack of installation of special polling stations was denounced by Beatriz Gutiérrez Müller, who regretted that the INE had not installed special polls, so she could not cast her vote.

President Andrés Manuel López Obrador’s wife assured that the institute’s omission in this regard prevented her from exercising her vote. The specific fact pointed out by the doctor is a good example, together with the first two successes listed, of what a Community Manager can do in social networks and thus establish better references in the market, according to the recommendations projected by Statista and Survata.

RE performing explanations about the obligations that institutions have to fulfill has been another of the great examples that we have seen this afternoon thanks to the intervention in conversations such as the one carried out by the presenter Gabriela Warkentin, after the academic also recognized that it is work of the INE to carry out consultations, not to make decisions about the budget that is assigned to carry out these exercises.

By law there is an obligation to make the inquiry. The INE does not have to say whether or not it is done.

The meme as a unit of communication

The use of memes or GIFs lightens social conversations that, when dealing with political issues, generally end with the confrontation of points of view, which end badly in most cases. Survata and Sprout Social highly recommend this content format to be able to communicate through social networks and we were able to see it during this Consultation.

Yes one #Referendum It is not defined with a lipsync for your life, I am not interested. pic.twitter.com/9d1cgfpVwu