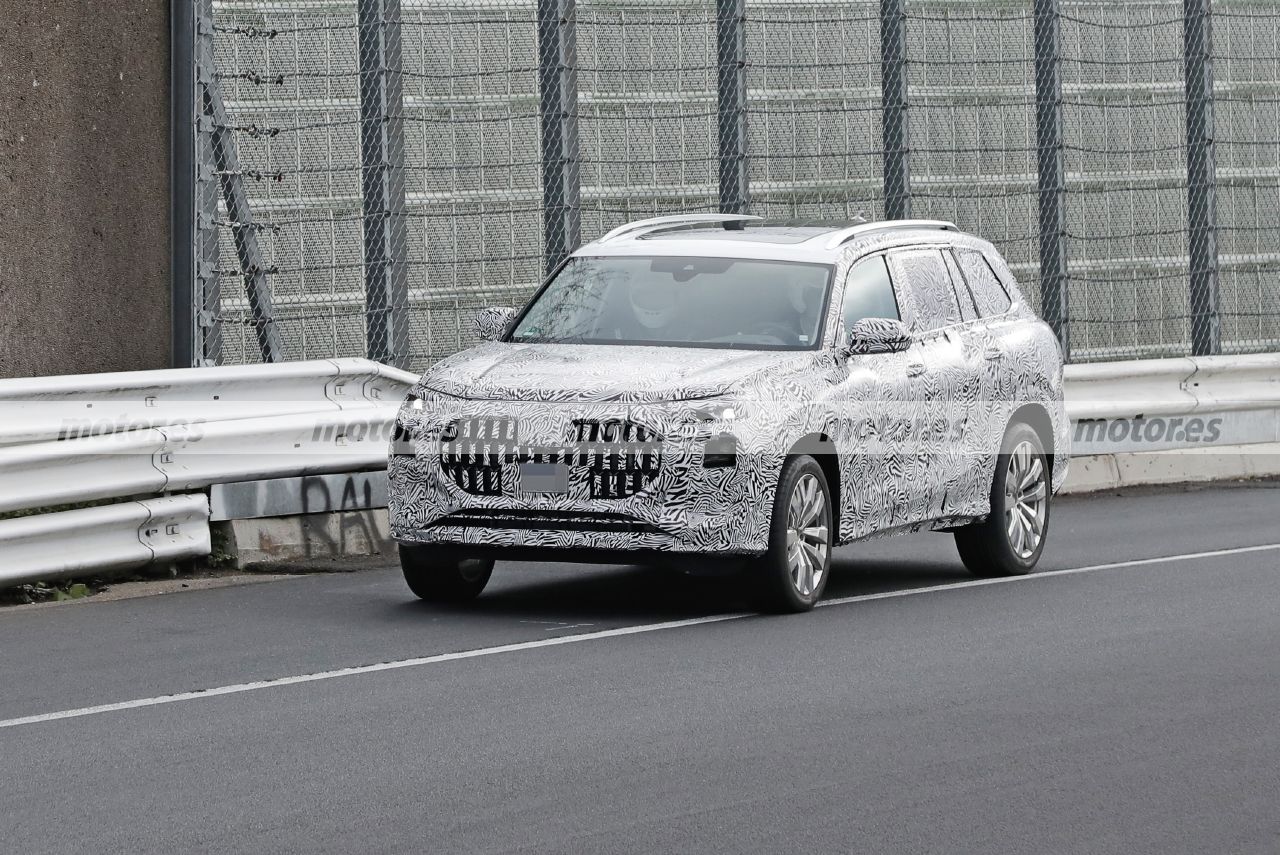 Half a year after seeing the first prototypes of the Audi Q9 2022, the largest model of the brand with the four rings reappears again. These new spy photos show the giant SUV in tests at the Nürburgring, without losing a single iota of camouflage. Despite this, it reveals interesting details that place it closer to China than to Europe.

In about six months, the step forward than the future Audi Q9 2022 progress is not a big deal, but at least some new detail reveals these new spy photos that we have received from one of the largest SUVs of the German brand, now hunted in a test session at the Nürburgring circuit.

Compared to the sighting last March in full winter testing in northern Sweden, the prototypes of the model have production headlights, very thin and extremely ragged. So much so that they look too much like those of the new Audi Q5 e-tron. In fact, with a little more detail when observing the spy photos, some additional projectors at the ends of the bumper, and just below the upper headlights, confirming that those seen in the winter days were not simply provisional.

Audi Q7 L, one of the names shuffled for the new SUV for China

But it is that this detail also coincides with the style of the new generation Chinese electric SUV, being a style unmatched in the four-ring product range for Europe. Behind, the new Q8 continues to show remnants of the taillights, a light band that will bite part of the boot lid, and that continue to maintain a great resemblance to those of the Volkswagen Atlas.

Read:  Valentino Rossi retires from MotoGP at the end of this season

And it is that the large proportions, together with this camouflage especially used by Asian models, confirm the commercial destination of the new Q9 for China. A model of which we also know that indeed shares the MEB platform of the Atlas and Teramont, with this aspect of Audi specially conceived for China. In fact, in recent months it has been pointing to a commercial name that will not be Q9, reserved for another model for Europe, pointing to more typical Asian names, such as “Audi Q7 L”.

Which is not at all crazy and yes much more logical, because there we have the Audi A7 L as different from the European model as the prototype of these images, which shares absolutely nothing with the Q7 or Q8. Its premiere is scheduled for this year 2022, although deadlines are unknown for now. The engine offering will also be shared with the Volkswagen equivalent models, 2.0 and 2.5-liter TFSI petrol blocks with a maximum power of up to 300 hp, 7-speed DSG automatic transmission and quattro all-wheel drive.