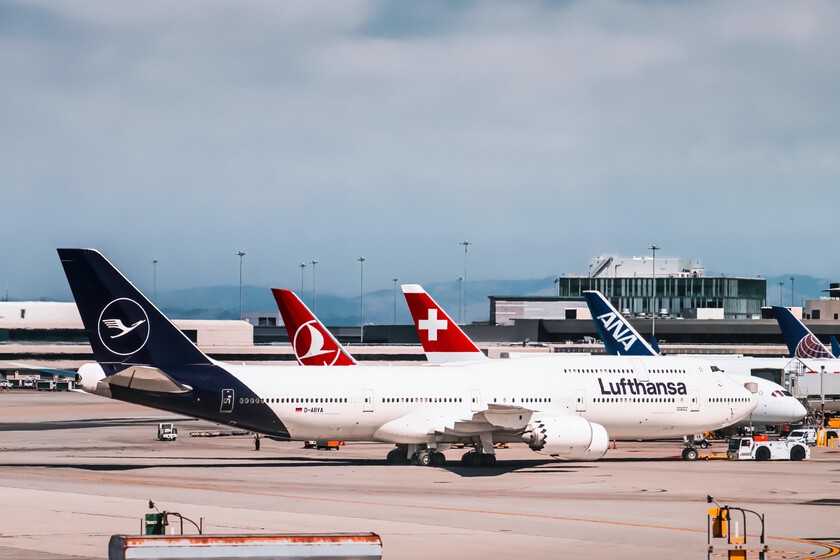 The European sky is filling with empty planes. Yes, without passengers or goods or cargo of any kind. Simply a phantom flight with no other objective than to fly. Well, they actually do have one: secure airport seats. The Omicron variant has put many off flying, and because of that, getting people and goods from point A to point B has become hell for thousands of flights.

It has even created strange alliances, with environmentalists and the main airlines united to reduce empty flights by pressuring the European Union, committed to the fight against climate change, to modify the most unnecessary law of aviation.

Empty flights. The Lufthansa Group, which includes Brussels Airlines, Austrian Airlines, Eurowings and Swiss, has to fly “empty” planes just to keep its take-off and landing rights at European airports. All the buzz has come after the German air giant said it would have to make 18,000 additional “unnecessary” flights over the winter to maintain landing spaces.

Jesus though, 18,000 empty flights by Lufthansa. I feel guilty if I accidentally throw a can in the wrong bin.

Why? At times, during the pandemic, airport runways have been primarily facilities for parking airplanes. However, in busy times, these locations are a valuable asset to companies competing for their share of the airspace. Currently and according to the EU regulation, airlines must operate flights in at least 50% of their scheduled take-off and landing times, or they run the risk of losing those seats. This threshold was revised down from the usual 80% when the pandemic struck in 2020, but is projected to rise to 64% in March.

The 80/20 rule (as it is known) tries to efficiently allocate scarce airport capacity, according to IATA. That is, it gives airlines the security of announcing tickets almost a year in advance, allowing customers to book long-term travel. Announcing the new change, the EC notes that air traffic estimates suggest the skies will be nearly 90% busier this year than in 2019. But with airlines continuing to take a hit due to Omicron, critics say the rule is still too strict.

On the EU side. This puts the EU in a bind. On the one hand, you need to ensure that airport seats are open to fair competition, allowing newcomers to compete for them if they are not used enough, and on the other hand, you want to prevent polluting planes from flying as much as possible. possible. Belgian Transport Minister Georges Gilkinet criticized his EU counterparts in a letter for joining the initiative and increasing the pressure. “The high level of pollution created by these flights is totally against the climate objectives of the EU”, it said, and urged the EC to put an end to this “environmental, economic and social nonsense”.

Of course, he did so after learning that 3,000 of these “ghost flights” were from Brussels Airlines planes.

Critics. Greta Thunberg is one of those who criticize the so-called “use it or lose it” rule: “The EU is surely in a climate emergency mode …”, she tweeted sarcastically a few days ago. The campaign group Stay Grounded called the empty planes a flagrant example of “miserable flights”, which also include short-haul travel, private jets and space tourism. “It seems that the fact that we are in a severe climate crisis and that flights are the fastest way to fry the planet has not yet reached the heads of decision makers and airlines.”

The European Union’s current climate commitment is to cut carbon emissions by 55% by 2030. And to further fan the flame, the news comes just two months after the United Nations Climate Conference in Glasgow.

The EU surely is in a climate emergency mode… https: //t.co/eHLFrd06y0

It’s not the first time. In reality, the same thing already happened in 2020, when several airlines maintained their normal flight frequency for weeks simply to maintain spaces in the central airports of Europe. Our colleagues from Xataka then told the phenomenon. To give you an idea: at that time, Cork airport went from handling up to 15,000 passengers a day to just 40.

The United Kingdom Secretary of Transport, Grant Shapps, then asked the air organization in charge of coordinating airports to temporarily suspend this 80/20 rule (now it is 50) for airlines, while in the US or China it is not. they had to fulfill it.

The price? Most of Lufthansa’s 18,000 “ghost” flights, although not all, are operating in Europe, but it can be difficult to calculate their exact environmental cost. Catherine Livesley, founder of No Fly Travel Club explained in this Euronews report that “a short-haul flight in a 737 emits approximately 18 tons of CO2 per hour, and that is almost double what an average European citizen emits in a Whole year”.