What is less known is the fact that the Amazon basin, one of the largest and most biodiverse plant and animal life deposits in the world, spans South America and covers approximately 40% of the continent.

The Yasuni National Park area, which protects most of the Ecuadorian Amazon basin, contains 150 species of amphibians and 121 reptiles, which is more than all species found in the United States and Canada together.

Meet 10 endemic animals of the Amazon: 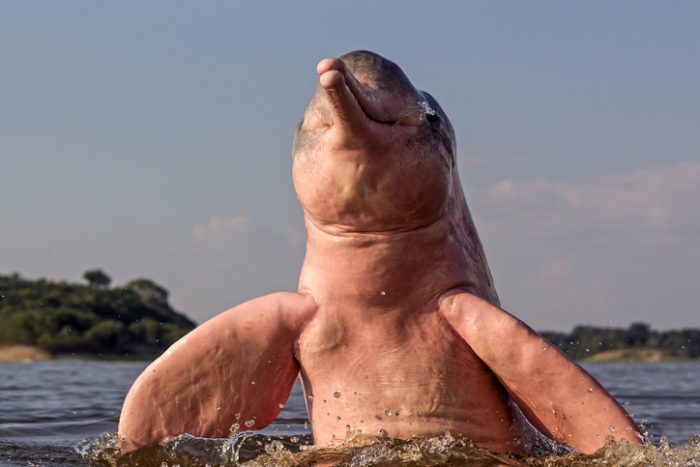 This cetacean looks remarkably different from its more familiar and oceanic cousin. His body is pale pink, with an elongated neck that allows him to move from left to right.

It has a long snout that looks like a beak, a rounded head and a smaller dorsal fin. It feeds on fish, crabs and turtles. Like many other aquatic animals in the Amazon, the dolphin is threatened by pollution and several development projects that restrict the natural flow of the river. 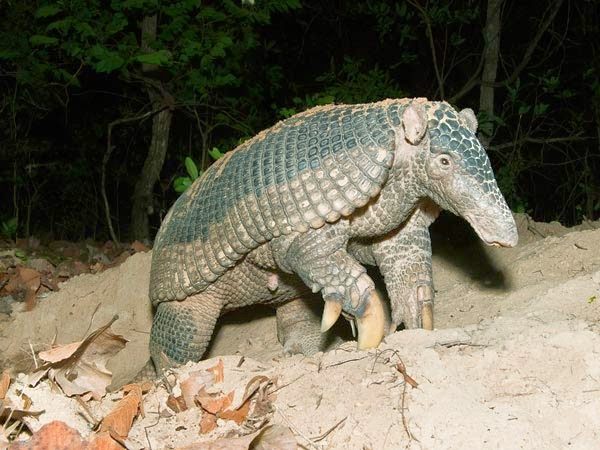 Armadillos are peculiar-looking creatures, with their armor shell made of bone and horn. Many armadillo species can be found in North America. But the largest, the giant armadillo, is only found in the Amazon, can weigh around 60 kg and measure 1.6 m.

The armadillo casing can be used for both attack and defense, and also has long front claws and between 80 and 100 teeth. They are nocturnal animals and live in a complex system of burrows. Unfortunately, hunting and trade in the black market are endangering the survival of the giant armadillo: its population has reportedly declined by 50% in the last 30 years. 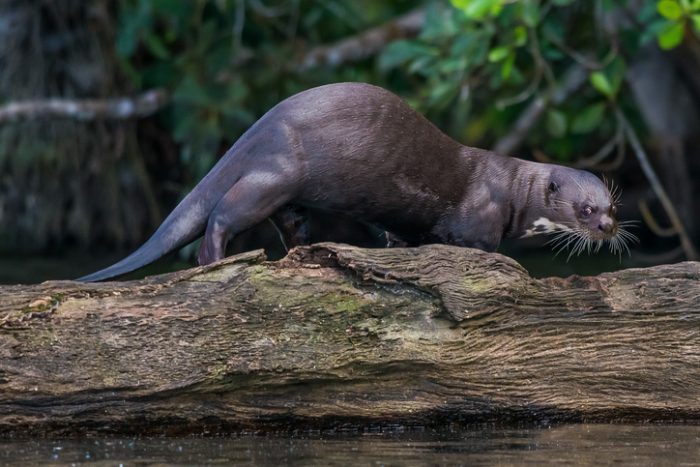 Otters are common throughout the world, but the giant river otter is endemic to the Amazon basin. Its body can reach up to 1.5 m, it has webbed hands and feet that are perfect for swimming and hunting in the tributaries of the Amazon River.

Hunting, water pollution and habitat loss are the main causes of population decline. 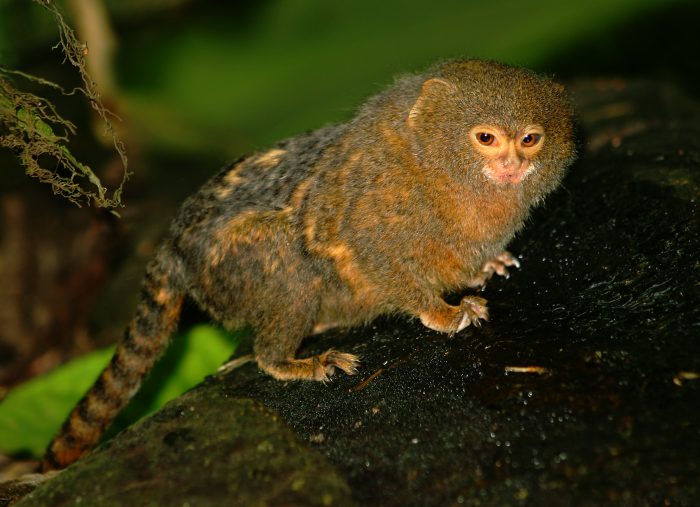 It weighs just over 100 grams, and its height is 12 to 15 cm. They live in troops that average around six individuals, and can be found in trees near swamps or streams, feeding primarily on tree sap, insects, small fruits and nectar. They are very small and shy, so visualizations are extremely difficult. 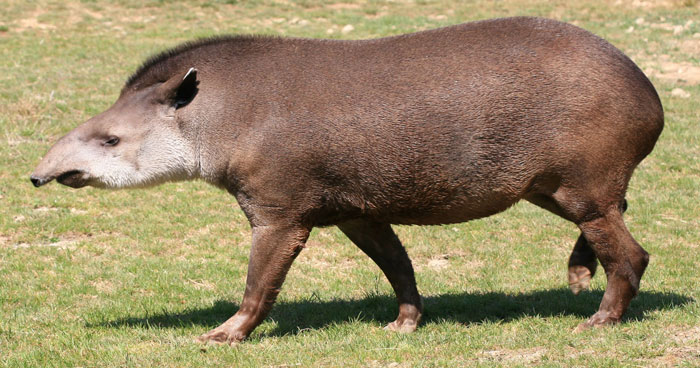 There are four Latin American Tapir species, all classified as vulnerable or endangered by the International Union for the Conservation of Nature (IUCN).

The South American Tapir is the largest land mammal in the Ecuadorian and Peruvian Amazon, but is among the Jaguar’s favorite prey. They can grow up to 1.8m long and weigh up to 250 kilos, however, they move quickly on land and are also excellent swimmers. Deforestation and hunting are the main threats to the survival of the Tapir.

Read:  The "magic" of the internet of things: Amazon servers go down and leave the Roomba and connected doorbells down 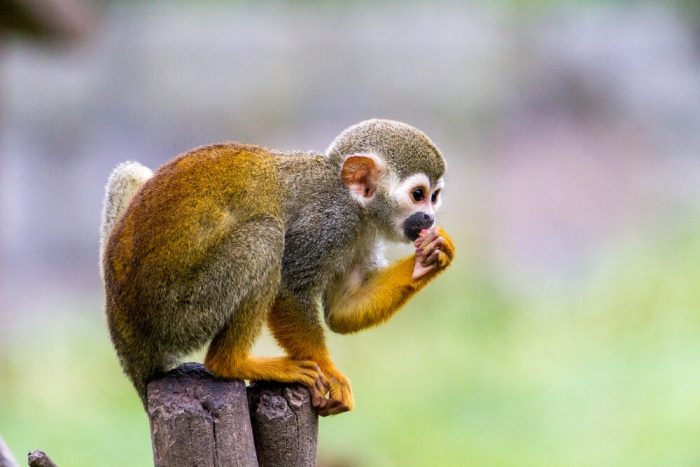 Often seen throughout the Amazon basin, these monkeys are called “Squirrel” because they are small and agile and spend most of their lives in trees, feeding mainly on fruits and insects. They can use their tail to climb.

In adulthood, your body measures between about 72 ± 10 cm from head to tail, and weighs between 0.55 kg and 1.25 kg. They have short, gray-brown fur on the head and shoulders, and ocher yellow fur on the back and extremities.

The fur on his face is black and white, which makes them look vaguely like a skeleton. For this reason, the German name for squirrel monkeys is Totenkopfaffen, which means “death-headed monkey.”

Its feathers are blue throughout the body with a little yellow around the head and feathers. Along with the Scarlet Macaw and Blue Throat, you can often see the Hyacinth Macaws rising in the skies of the Amazon Rainforest.

Their diets consist mainly of fruits and nuts of native Amazonian palm trees, which break with their hooked peaks. They use their tongue to reach the nutshell and their claws to hang on the trees. Unfortunately, macaw hyacinths are in danger: their main threat is the illegal pet trade. 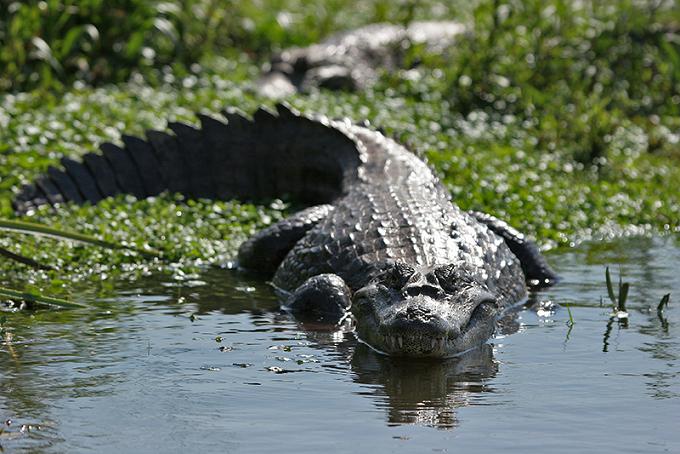 The Black Cayman is the largest reptile in the Amazon, and also one of the largest and most effective predators. They have dark and flaky skin, they can reach up to six meters. They hunt virtually any type of land animal or that lives in the river. 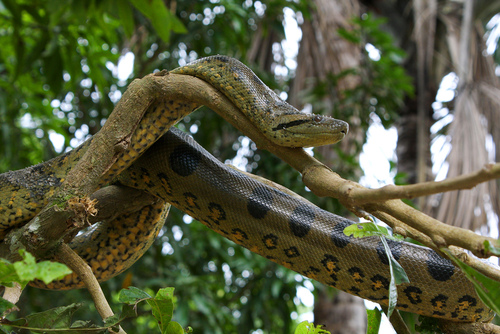 It is found in the northern part of South America (including the Amazon), it is the heaviest and best known snake species. It usually measures approximately 4.6 m but can reach six.

The reticulated python of Southeast Asia is a little longer, but the green anaconda is generally more robust. They are non-poisonous snakes, they kill their prey by suffocation before swallowing them whole. They can kill large animals such as capybara, tapirs and even jaguars, but there is little evidence of attacks on humans. Anacondas spend most of their time near water: for this reason, they are also commonly known as “water boa.” 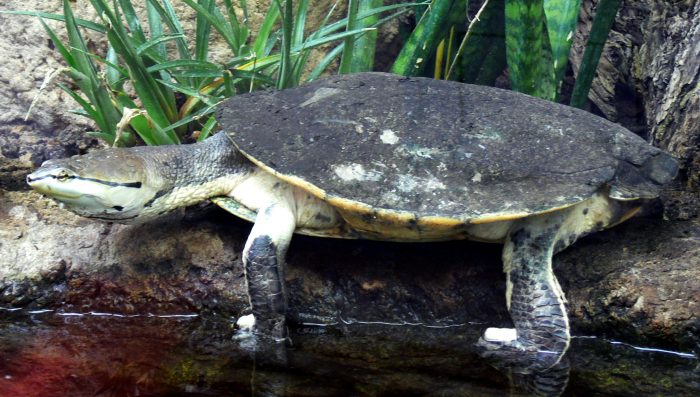 Another of the endemic animals of the Amazon is also known as the Arrau turtle, it is the largest freshwater turtle in the Amazon. It can weigh up to 90 kilos and measure about a meter long.

They are mostly vegetarians and play an important role in maintaining a healthy riverine ecosystem. They are scavengers, so they keep the rivers clean by removing dead leaves, fish and other organic materials.

The presence of river turtles in the Amazon is considered a sign of the ecological well-being of a particular area of ​​the river. However, they are now under threat due to hunting, egg collection, habitat loss and pollution.