1% of the population already owns 38% of global wealth 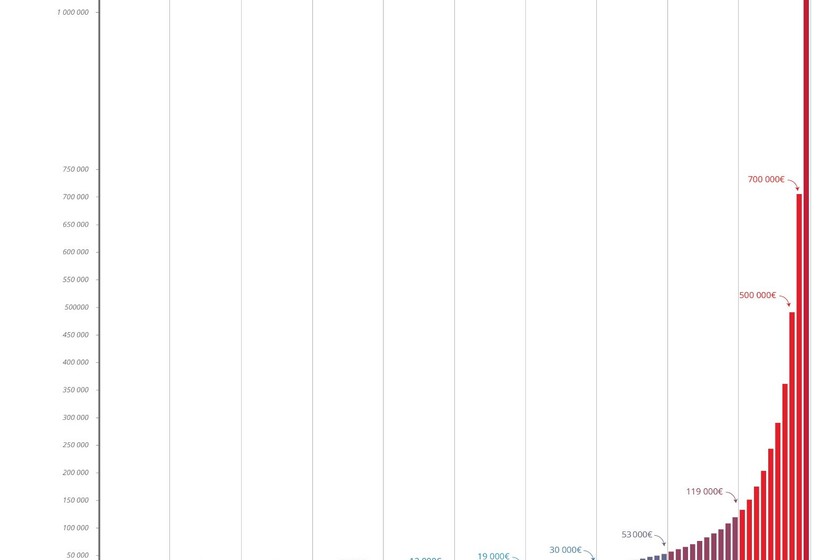 Many people think that being rich is simply having a nice house, money in the bank, a vacation spot, and maybe a fancy yacht. But the kind of money that the richest 1% of households in the world have overshadows this concept. This population group owns entire corporations, multi-million dollar mutual funds, islands in the Caribbean, and even rockets that take them to outer space.

The median net worth of the 1%, also known as the richest 1% of global population households, has multiplied over the past two decades. Now it towers higher than ever before the net worth of the average citizen.

The graphic. Not much more needs to be said. This infographic with data from the World Inequality Database illustrates well what we are talking about. 1% of the population owns 38% of global wealth. In fact, it has been necessary for the height of the graph to have similar dimensions because not even the bar of that 1% fits in the infographic. An abysmal difference. And yet, 50% of the population only owns 2% of the wealth.


How much are we talking about? The minimum net worth of the top 1% is approximately €10 million. How much would you have to earn to join that group? Well, an average of 680,000 euros a year, according to the Institute of Economic Policy. On the other hand, the number of billionaires is already around 2,800, but has been growing rapidly. In fact, the wages of the top 1% between 1979 and 2019 increased by more than 160%, compared to 26% for those in the bottom 90%.

Who are they? Not the ones you imagine. Although the media has largely portrayed this group as greedy Wall Street bigwigs, demographic analysis reveals a very different picture. The richest 1% are spread across many industries and come from many backgrounds. It includes doctors, businessmen and executives, as well as those who inherited wealth, which is a large number.

On the rise. According to the 35th annual Forbes list, the number of the world’s richest billionaires soared to an unprecedented level of 2,755 in 2021, 660 more than in 2020. In total, they are worth €11.6 trillion, compared to the 8 billion in the previous year’s list.

Where are they? There were 834 billionaires in North America and 847 in Europe, although the former had more wealth (3 billion euros) compared to the latter (2 billion). China, Germany and the United States were the top three countries in terms of the number of billionaires. China had 342 with a combined wealth of 1 trillion and Germany listed 153 with 450 billion in combined wealth.

Russia, Switzerland, the UK, Hong Kong, India, Saudi Arabia and France round out the top 10 nations, in terms of billionaires.

More than the whole middle class. Yes, 60% of US households now have fewer assets than the top 1%, Bloomberg reported in an article a few months ago. It is a high point of a growing trend: the concentration of wealth for those at the top and stagnation for everyone else.

Causes. There are a variety of reasons for the disparity, but a main factor is that they own more than 50% of the capital in public and private companies. And they have also benefited from the rises in the stock market. These earnings help them reinvest their money in exclusive investments like hedge funds and private equity firms.

The disparity can also be attributed to tax breaks on income, gift and estate taxes, as well as the decline of unions. Although the middle class also benefited somewhat from the tax cut, it allowed the wealthy to retain a much larger portion of their assets and pass them on to their heirs.